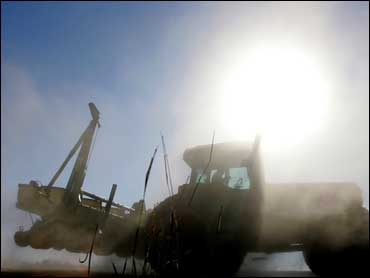 Gov. Arnold Schwarzenegger declared a state of emergency Friday because of three years of below-average rain and snowfall in California, a step that urges urban water agencies to reduce water use by 20 percent.

The drought has forced farmers to fallow their fields, put thousands of agricultural workers out of work, and led to conservation measures in cities throughout the state, which is the nation's top agricultural producer.

"This drought is having a devastating impact on our people, our communities, our economy and our environment, making today's action absolutely necessary," the Republican governor said in his statement.

Mandatory rationing is an option if the declaration and other measures are insufficient.

State agencies must now provide assistance for affected communities and businesses and the Department of Water Resources must protect supplies, all accompanied by a statewide conservation campaign.

(Calif. Dept. of Water Resources)
(The south fork of Feather River at Lake Oroville, pictured Feb. 3, 2009. The water level at the California reservoir is down to 37 percent of its capacity.)

Three dry winters have left California's state- and federally operated reservoirs at their lowest levels since 1992.

Federal water managers announced last week that they would not deliver any water this year to thousands of California farms, although that could change if conditions improve. The state has said it probably would deliver just 15 percent of the water contractors have requested this year.

Across Texas, the nation's No. 2 agricultural state, drought conditions are evaporating stock tanks, keeping many crop farmers from planting into long-parched soil, forcing cattle producers to cull their herds, and dropping water levels in state lakes.

Despite hurricanes Dolly, Gustav and Ike soaking Texas in 2008, almost every part of the state - nearly 97 percent - is experiencing some drought, according to the most recent U.S. Drought Monitor map, released Feb. 26.

Parts of Central Texas and the Hill Country - more that 8 percent of the state - are not only in exceptional drought - the most severe stage of dryness - but they are now the driest region in the country and the driest they have been since 1918. It is the only place in the U.S. experiencing exceptional drought.

San Antonio has gotten only 16.67 inches of rain since September 2007, its driest 17 months ever and about 28 inches below normal.

November, December and January were the driest statewide since 1971 for that three-month span, the fourth-driest on record. Texas averaged .32 inches of rain in January, the fourth driest in history, and about one-fifth the normal monthly total.

Statewide numbers for February have not yet been compiled.

"February's gotten nothing but worse," said Victor Murphy, a meteorologist with the National Weather Service in Fort Worth. "It's going to be the same gloomy numbers."

Some local numbers were available, though, and they show that none of the state's 25 largest cities got even half the normal rainfall between Dec. 1 and Feb. 25.

"That's another example of how bad things are," Murphy said. "Things just continue to get worse."

There is, however, a glimmer of hope. Forecasters say it appears the La Nina weather pattern that's kept Texas dry may be breaking up over the central Pacific Ocean.

"It looks like it's starting to weaken," Murphy said. "With that being the case, May and June, our normal rainy months, we might have something positive to look forward to."

If those rains don't materialize, the cost to agriculture could be enormous.

"It's too preliminary" to estimate what the losses could be this year, said Travis Miller, drought specialist with Texas AgriLife Extension Service.

(AP/R.W. Erdrich, Reporter-News)
(Flames spin into a fiery twister as a brush fire rapidly crosses a meadow in Jones County, Texas, Jan. 22, 2009. Since the beginning of the year, about 3,400 wildfires have been reported across the state, scorching nearly 105,000 acres.)

If the recent past is any indication, agriculture losses could top 2006. Drought-related crop and livestock losses were the state's worst ever for a single year, totaling $4.1 billion. Numbers on the latest drought map are worse than those for same week of 2006.

What does that mean to ranchers?

Most started culling their herds a few months ago and that will probably continue, Miller said.

Central Texas cattle raiser Gerry Shudde, who during the 2006 drought cut his small herd in half because he could no longer feed them, has six stock tanks for watering his cattle. Four of those tanks are already dry and two others, which were dug deeper after the 1950s drought, are nearly empty.

He normally plants oats and other feed grasses in his pastures to help feed his cattle during the winter.

This year, though, "there's not a seed come up on any of them yet," he said. "We go through these (droughts). It's just time for this to end."

Miller said most ranchers use supplemental feed - hay and other grazing grasses cut and harvested months ago - during winter months. This year, there is a big difference.

Crop farmers too are in a quandary. Soil moisture is inadequate across much of the state.

"There's really nothing to plant on," Miller said. "We need 8 to 10 inches to fill the soil profile up."

Miller said he is reminded of the 1998 drought, when a dry winter and spring finally gave way to a wet June.

"It rained a lot but all the crops were already lost," he said.

It won't be just agriculture impacted by continued dry conditions, especially if the drought persists into spring months when homeowners and others around the state begin watering lawns and gardens.

Of the 109 lakes the Texas Water Development Board monitors, 28 were at least 90 percent full, according to the agency's most recent monthly report. That compares with 42 in early September and 83 in late May. Summertime temperatures contribute to evaporation.

The storage capacity of Texas lakes dipped slightly to 80 percent since the late December report. One horror spot is O.C. Fisher Reservoir west of San Angelo, which the report states is "effectively empty."

"I wish we had some rain," said Barney Austin, director of the board's surface water resources. "You fly across the state and it's all brown, not green."

Austin expects the situation to grow even more dire as Texans begin tending to their landscapes.

"If we don't get any rain between now and when it starts getting hot we're going to be in a lot more trouble," he said.

Drought also means a heightened threat of wildfires. As of Thursday burns bans were in place in 200 of the state's 254 counties. Historically, the second week of March is the worst for wildfires.

More than 900,000 acres burned as wildfires swept across the Panhandle during one 5-day span in mid-March 2006. Twelve people, including a firefighter, and thousands of livestock perished.

"This year the grass fuel is really a mosaic because a lot of the state didn't get adequate spring rains" in 2008, said Mark Standford, chief of fire operations for the Texas Forest Service. "It's extremely dry."

The only places not experiencing any drought on this week's drought map are all or parts of about 15 counties in northern far East Texas, including Bowie, Red River, Lamar, Titus, Hopkins, Franklin, Harrison, Cass, Upshur, Marion, Smith, Gregg, Morris, Rains and Wood counties.

Shudde, the rancher, can for now only wish that list included Uvalde County, where his land is.

In California, Situation Is "Extremely Dire"

Schwarzenegger declared a statewide drought in June but stopped short of calling a state of emergency. His 2008 executive order directed the state Department of Water Resources to speed water transfers to areas with the worst shortages and help local water districts with conservation efforts.

Over the last few weeks, storms have helped bring the seasons' rain totals to 87 percent of average, but the Sierra snowpack remains at 78 percent of normal for this time of year. State hydrologists say the snowpack must reach between 120 to 130 percent of normal to make up for the two previous dry winters and replenish California's key reservoirs.

Court decisions intended to protect threatened fish species also have forced a significant cutback in pumping from the Sacramento-San Joaquin delta, the heart of the state's delivery system.

The governor, farmers and lawmakers have argued for years that California must upgrade its decades-old water supply and delivery system and build new reservoirs.

"The situation is extremely dire," said Tim Quinn, executive director of the For more info: