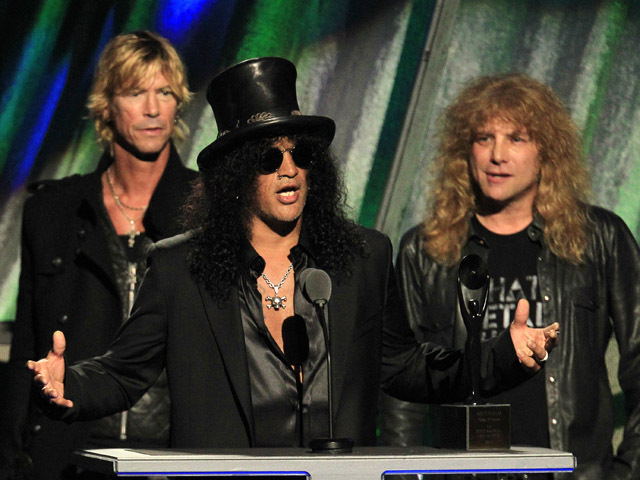 (AP) CLEVELAND - The Rock and Roll Hall of Fame ceremony didn't miss Axl Rose at all.

The rowdy celebration, which in past years has included awkward moments, touching tributes and unforgettable performances, rocked on without Rose, the Guns N' Roses frontman who may one day regret skipping a night when 6,000 fans, 1,400 guests and many of music's biggest stars partied in Public Hall with the class of 2012.

Before the ceremony started with a blistering performance by Green Day, Chili Peppers lead singer Anthony Kiedis said it was strange to be enshrined while on tour.

"We're going somewhere," Kiedis said. "How can we stop and take an award when really we're just halfway there? But it is nice to be together with people that we spent some incredible years along the way writing songs and playing shows in little theaters and sweaty little transvestite clubs and having the time of our lives."

Green Day, which was scheduled to induct Guns N' Roses, got things started by tearing into "Letterbomb" with Billie Joe Armstrong leading the sold-out room of fans and celebrities in a sing-a-along chorus.

The first mention of Rose's name drew a smattering of boos that were soon drowned out by the music.

Rose, the screeching frontman and ringmaster of the G N' R traveling circus of dysfunction for decades, said earlier this week that he didn't want to be part of the ceremony because it "doesn't appear to be somewhere I'm actually wanted or respected."

He cited a continuing rift with his former band mates as the main reason for not attending. His decision disappointed fans and ended months of speculation about whether the original Guns N' Roses lineup would unite for the first time since 1993 and perform any of their classic hits like "Welcome to the Jungle" or "Sweet Child O' Mine."

As the ceremony approached, fans gathered on the sidewalks outside the historic venue, which hosted the Beatles in 1964, for a peek at some of rock's royalty.

Alice Cooper was the fan favorite on the red carpet, signing autographs, telling printable stories and waving in response to cheers of "Alice, Alice!"

"New York is glitz, Cleveland is the nuts and bolts," said Cooper, comparing the cities that share the rock hall induction ceremonies, which are held at New York's Waldorf-Astoria and come to Cleveland every third year.

Funk icon George Clinton made a splashy entrance, arriving in a silver bullet-shaped vehicle familiar to amusement park thrill riders. Wearing a gray herringbone coat and black fedora, he stood and waved from the back seat.

Like Guns N' Roses, the Red Hot Chili Peppers emerged from Los Angeles during the 1980s when Sunset Strip's rock scene was dominated by "hair" bands more concerned with their tight lycra pants and eyeliner than their sound. Not the Chili Peppers, who found their unique groove by blending funky hooks and a punk ethos.

While their lineup has undergone some changes — founding guitarist Hillel Slovak died of a heroin overdose in 1988 — Kiedis and bassist Flea have survived personal highs and lows and the band remains one of music's top live acts.

Kiedis said Slovak would have loved the honor.

"I think that he would have a good laugh," Kiedis said. "Yeah, it would certainly mean something to him as he cared deeply about music and the love of the brotherhood of being in a band and being a creative force in the universe, which he is and always will be a brother in everything we do."

Van Zandt credited the underrated bands for having a major influence on generations of rockers. He said both were blessed to have strong lead singers in the late Steve Marriott and Rod Stewart.

"Not many bands get two lives or two of the greatest white soul singers in the history of rock and roll," he said.

Stewart came down with the flu this week and couldn't attend. Simply Red's lead singer Mick Hucknall, a friend of the band, filled in for Stewart on "All Or Nothing," "Ooh La La," and the crowd-pleasing classic "Stay With Me," with Wood, previously inducted with the Rolling Stones, delivering an exquisite slide guitar.

During a speech that was at times comical but heartfelt throughout, John Mellencamp inducted Donovan, a balladeer from the flower-power 1960s once labeled "the new Dylan." Donovan Leitch had a string of hits in the `60s with "Sunshine Superman," "Hurdy Gurdy Man" and "Mellow Yellow."

Mellencamp, sporting a healthy growth of gray whiskers, grabbed a few puffs on a cigarette as a video tribute of Donovan played on giant screens. During his remarks, Mellencamp raised the copy of Donovan's "Fairy Tale" album he bought 47 years ago as a kid in Indiana.

"I wasn't just listening to Donovan, I was living Donovan," Mellencamp said. "He was my inspiration. One of the original originals."

Instead of reading prepared notes, Donovan accepted his honor by reciting a poem — without using a script — inspired by his induction. It ended with the line: "I thank my fellow artists all."

Blues guitarist Freddie King was inducted first. Nicknamed "The Texas Cannonball," the late King was one of the first bluesmen to be backed by a multi-racial band. He was welcomed into the hall by ZZ Top's Billy Gibbons and Dusty Hill.

"Freddie taught us how to play like a group," Gibbons said.

The influential Nyro, who died in 1997, never reached commercial success but wrote hits for other artists. She was inducted by singer Bette Midler, who called the New York songstress "one of my favorite artists."

"I loved her the moment I dropped the needle on the vinyl," Midler said. "She influenced so many musicians. She was the very essence of New York City. Not in the gritty real sense, but in the passionate, romantic, ethereal, eternal sense."