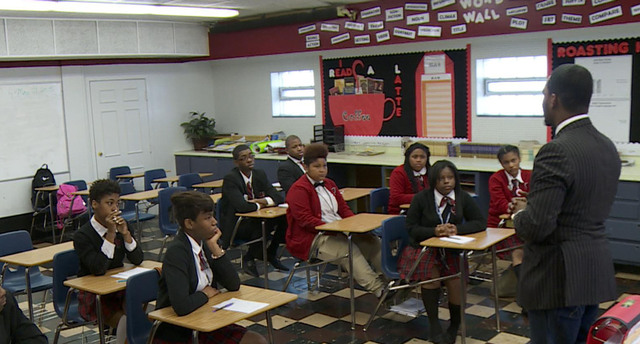 Most people turn to law enforcement when they are in need of urgent help, but for some high school students in Cleveland even the word "police" causes anxiety.

"They're the ones who are supposed to be protecting you, keeping you safe. Now in our society I feel like I think of white men, you know, going after the African-American community," said Ke'sha Hines, a senior at Northeast Ohio College Preparatory School.

Fellow senior Ariel Brown said, "I feel as though today the term 'police officer' almost has the same effect as the word 'master' did almost about let's say 200 years ago."

Many of these Cleveland students have had first-hand experience engaging with police officers.

"You hear the word 'police,' you tense up, even in our generation," said Brown. "Even myself, who just walks down the street, nonchalant, minding my own business, texting my friends and I see a police car, I automatically pay all of my attention to my surroundings and wonder will today be the day I die because my skin is a little bit too tan."

"I had a friend who was walking when the police stopped him and made him get on the ground for no reason at all," Crawford said.

These students, all African-American, have grown up with many examples of excessive force used by police officers, experiences that shape their outlook.

At the end of 2014, the Department of Justice found that the Cleveland Division of Police "engages in a pattern or practice of the use of excessive force." In its investigation, the department said that it determined that "structural and systematic deficiencies and practices - including insufficient accountability, inadequate training, ineffective policies and inadequate engagement with the community - contribute to the use of unreasonable force."

With the death of 12-year-old Tamir Rice six months ago at the hands of a white police officer and Saturday's acquittal of Michael Brelo in the deadly shooting of two African-American in 2012, it is clear to see why the students feel the way they do.

Some students, like Soniqua Turner, understand why many contemplate turning to violence.

"It's a chain of events that keeps happening, and it's in our city - this is our city - so in order for us to control what's going on we have to take to violence because that's the way we feel is the only way out," Turner said.

In response to such statements, community activist Basheer Jones says, "The sentiment of our young people in high schools around Cleveland is that they are angry and upset, and my message to them is continue to be upset but I don't want you to tear anything down."

For the past five years, Jones has been attending schools like Northeast Ohio College Preparatory engaging with students about racial issues in Cleveland.

"This is a conversation that we don't like to have because we are so worried about making people feel uncomfortable," he said, "but the issue with that is we're not getting to the root of the problem."

Jones believes that by talking about these issues he can help channel the students' passion toward what he calls "positive forms of protest."

"You can't change the system by destroying buildings," Jones told his students. "What we need to produce is not more buildings, but produce change-makers."

For Jones, the issue of racial tension is Cleveland is personal. While driving to a local community volunteering program, he said that his own 4-year-old son said a few weeks ago, "Daddy, I'm afraid of the police ... I'm afraid that they'll kill me."

While Jones reassured his son that he was safe, he knows that both he and his son could one day be a target. While holding a picture of his children that he keeps on his car's dashboard, Jones said, "This is the work right here. This is the reason why I fight for them."

Jones hopes to "out-work the negative energy that's trying to destroy my community."