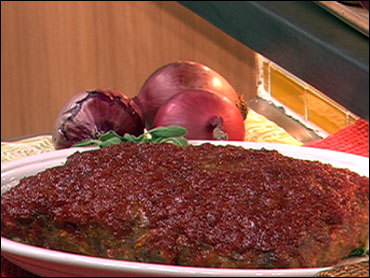 It sometimes seems as if there are a million meatloaf recipes out there; every family probably has its own.

But no matter what, there are three ingredients that are essential to the perfect meatloaf.

And as part of the Early Show series "Comfort From the Kitchen," Chris Kimball, editor in chief of Cook's Illustrated and host of "America's Test Kitchen", shared his meatloaf secrets Tuesday.

Of course, Cook's Illustrated does nothing half-heartedly. Chris's test kitchens closely examined everything that went into meatloaf, trying different combinations and substitutions to develop what they felt was the perfect recipe.

And, buzz has it that meatloaf is becoming somewhat chic to serve at dinner parties in this economy! Apparently, it's seen as a good reflection of the times and hey, everybody loves it!

Kimball says the original meatloaf "was called a cannelon, which was a cylinder of minced mat wrapped in thin slices of beef and tied. With the advent of the meat grinder, cheap cuts of meat could be turned into ground beef and used as a staple of American home cooking. Over time, many meatloaf recipes were developed at test kitchens owned by large food companies who were creating dishes to promote their convenience products."

Beware Of The 'Bridezilla Syndrome'

"We tested every possible combination of beef, pork, and veal, plus tests of ham and ground up bacon. The winner, oddly enough, was a classic supermarket Meatloaf Mix using 50 percent ground chuck and 25 percent each veal and pork.

"Pork adds flavor, the beef is necessary for texture as well as flavor, and the veal keep the loaf tender. (Veal contains a high level of gelatin.)

"QUICK TIP: If you only have ground beef on hand, add a teaspoon of unflavored powdered gelatin to two pounds of meat. The gelatin will act much like the veal, keeping the texture softer and moister."

This ingredient keeps the meatloaf texture from becoming too dense and hamburger-like.

"We tested Grapenuts, Corn Flakes, rice, grated potato, mashed pinto beans (pass the salsa!), quick-cooking tapioca, cracker crumbs, quick-cooking oatmeal, and fresh breadcrumbs. And the winner? The winners were any of the last three, but we settled on saltine crackers as the easiest alternative."

Every recipe also needs a liquid of some sort to keep the meatloaf from being too dry. Chris settled on either whole milk or yogurt, because they didn't add too much flavor to the meatloaf, but still succeeded in keeping the dish tender.

Of course, the meatloaf recipe includes a few other ingredients as well: onion, garlic, parsley, egg, dijon mustard, Worcestershire sauce, a little bit of hot sauce and some dried thyme.

The dish is called meatloaf; you would assume that it should be cooked in a loaf pan, right? Chris says the problem with doing that is that fat and juices released from the meat during cooking have no where to go, so they just fill up the pan and the meat winds up stewing, not really baking.

He suggests making a free-form loaf and placing it on an aluminum foil-covered baking pan. That also enables a nice crust to form on the sides and top of the meatloaf.

Chris brushes a simple glaze of ketchup, brown sugar and cider vinegar over the top of the loaf and THEN covers the top in slices of bacon!

INSTRUCTIONS
1. For the glaze: Mix all ingredients in small saucepan; set aside.
2. For the meat loaf: Heat oven to 350 degrees. Heat oil in medium skillet. Add onion and garlic; sauté until softened, about 5 minutes. Set aside to cool while preparing remaining ingredients.
3. Mix eggs with thyme, salt, pepper, mustard, Worcestershire sauce, pepper sauce, and milk or yogurt. Add egg mixture to meat in large bowl along with crackers, parsley, and cooked onion and garlic; mix with fork until evenly blended and meat mixture does not stick to bowl. (If mixture sticks, add additional milk or yogurt, a couple tablespoons at a time until mix no longer sticks.)
4. Turn meat mixture onto work surface. With wet hands, pat mixture into approximately 9-by-5-inch loaf shape. Place on foil-lined (for easy cleanup) shallow baking pan. Brush with half the glaze, then arrange bacon slices, crosswise, over loaf, overlapping slightly and tucking only bacon tip ends under loaf, (see illustration 1, below).
5. Bake loaf until bacon is crisp and loaf registers 160 degrees, about 1 hour. Cool at least 20 minutes. Simmer remaining glaze over medium heat until thickened slightly. Slice meat loaf and serve with extra glaze passed separately.

We found the original recipe for Mrs. Rockefeller's highly seasoned meatloaf in a book called "Meat," by Leon Lobel (1978). The Lobel brothers run a family meat business in Manhattan, and as Leon notes, this recipe came from the wife of former Arkansas Gov. Winthrop Rockefeller. We found it to be super-easy to make and very moist, thanks to the cottage cheese and sour cream included in the mix of ingredients. Michelle got the recipe from her mother, who claimed she got it from an old cookbook -- likely Mr. Lobel's -- as many of the unique ingredients (including rye bread, curry powder, and onion soup mix) are found in both versions. Of course, Michelle's mother did add some touches of her own, adding sage to the mix, while omitting others, such as nutmeg and rosemary. In any event, we can understand why she says, "Everyone who eats it asks for the recipe."

METHOD
1. Adjust an oven rack to the middle position and heat the oven to 300 degrees. Line a large rimmed baking sheet with foil, set a wire rack over the baking sheet, and place a 9 by 6-inch piece of foil in the center of the rack. Following the photos, use a skewer to poke holes in the foil at 1/2-inch intervals.
2. Stir the sour cream and bread crumbs together in a bowl. Whisk the cottage cheese, eggs, soup mix, steak sauce, mustard, sage, hot sauce, and curry powder together in a large bowl. Add the sour cream-bread mixture, beef, and sausage to the bowl. Mix with your hands until evenly blended and the meat mixture does not stick to the bowl.
3. Transfer the meat to the foil rectangle and, using wet hands, pat the mixture into a 9 by 6-inch loaf. Bake the meatloaf for 40 minutes.
4. Meanwhile, melt the butter in a large skillet over medium heat. Add the onions and cook, stirring occasionally, until softened, 5 to 7 minutes. Stir in the chili sauce and cook until the flavors are blended, about 3 minutes.
5. Pour the sauce evenly over the meatloaf and continue to bake until the center registers 160 degrees on an instant-read thermometer, 50 minutes to 1 hour longer. Let rest for 15 minutes before serving.

For more recipes, go to Page 3.

A recipe with a name like this is sure to bring the kids running. The "frosting" is, of course, not a sweet icing, but a blanket of creamy mashed potatoes that surrounds the meatloaf, making this a comforting and filling winter meal. "This meatloaf was a favorite at our house when I was growing up. My mom has made this recipe since I was a child, and her mother before that. I have been making it for my own family for six years. Although I often make more complicated dishes, it still evokes that 'Wow!' look. It's comfort food at its simplest and finest."

METHOD
1. For the meatloaf: Adjust an oven rack to the middle position and heat the oven to 350 degrees. Line a large rimmed baking sheet with foil, set a wire rack over the baking sheet, and place a 9 by 6-inch piece of foil in the center of the rack. Use a skewer to poke holes in the foil at 1/2-inch intervals.
2. Toss the bread crumbs with 2 tablespoons of the oil, a pinch salt, and a pinch pepper. Toast the bread crumbs in a single layer on a rimmed baking sheet, stirring occasionally, until golden brown and dry, 8 to 10 minutes. Set aside to cool to room temperature.
3. Heat the remaining 1 tablespoon oil in a small skillet over medium heat until shimmering. Add the onion and cook, stirring occasionally, until softened, 5 to 7 minutes. Set aside to cool to room temperature.
4. Whisk the milk, eggs, thyme, onion powder, 1 1/2 teaspoons salt, and 1/2 teaspoon pepper together in a large bowl. Add the bread crumbs, onion, meatloaf mix, and parsley.
Mix with your hands until evenly blended and the meat mixture does not stick to the bowl.
5. Transfer the meat to the foil rectangle and, using wet hands, pat the mixture into a 9 by 6-inch loaf. Bake until the center of the meatloaf registers 140 degrees on an instant-read thermometer, 45 to 50 minutes. Remove the meatloaf from the oven.
6. For the frosting: While the meatloaf bakes, place the potatoes in a colander and rinse under cold running water until the water runs clear. Bring the potatoes and 2 quarts water to a simmer in a medium saucepan and cook until tender, 20 to 25 minutes. Drain the potatoes and return to the saucepan.
7. Stir the potatoes over low heat until thoroughly dried, 1 to 2 minutes. Set a ricer or food mill over a bowl and press or mill the potatoes into the bowl. Gently fold in the cream, butter, salt, and pepper until the cream is absorbed and the potatoes are thick and creamy. Cover and set aside to keep warm until the meatloaf reaches 140 degrees.
8. Once the meatloaf has reached 140 degrees, use a spatula to spread the potatoes over the meatloaf, smoothing the top and the sides. Sprinkle the meatloaf evenly with the cheese and return to the oven until the center registers 160 degrees on an instant-read thermometer, about 30 minutes.
9. Turn on the broiler and broil the meatloaf until the potatoes are golden brown on top, 3 to 5 minutes. Let rest for 15 minutes before serving.

METHOD:
Preheat oven to 350.
Combine all ingredients except meat & cheese.
Mix in ground beef, form 10x12 rectangle on waxed paper. Sprinkle shredded cheese almost to edge.
Beginning at short side, roll up meat, and seal edges and ends. Place loaf seam side down in a baking dish.
Bake no more than 1/14 hrs.
If desired, place cheese slices over top and return to oven to melt.