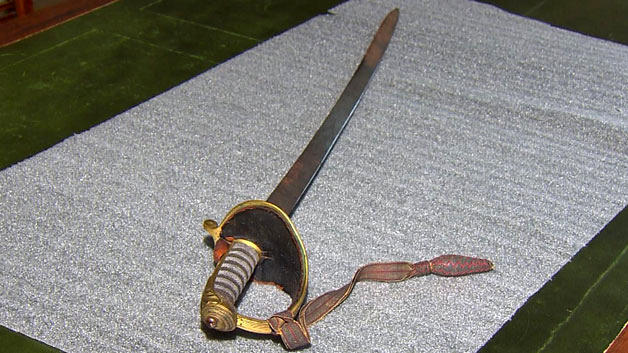 BOSTON -- The long-lost sword of Col. Robert Gould Shaw, the commanding officer of the North's first all-black regiment during the Civil War, has been acquired by the Massachusetts Historical Society, CBS Boston station WBZ-TV reports.

Shaw led the 54th Massachusetts Infantry into battle at Fort Wagner, South Carolina, in 1863, which was depicted in the critically acclaimed 1989 film "Glory." He was killed on the battlefield, and his body was robbed of the sword.

The sword was recovered in 1865 and returned to Shaw's parents. But it disappeared again until it was recently discovered in a North Shore family attic by Mary Minturn Wood and her brother, descendants of Shaw's sister Susanna.

The family decided to gift the sword to the Massachusetts Historical Society, where it is now in the hands of curator Anne Bentley.

"It's just a magnificent specimen of a sword, and it's exactly what a colonel would carry in a war," Bentley said.

For Bentley, the sword represents more than a weapon of war. It signifies the bravery of an African-American regiment.

"What they did was they proved, beyond a shadow of a doubt, that they were as courageous and steadfast and honorable as any white regiment," Bentley said.

The sword will be on display to the public at the Massachusetts Historical Society on Tuesday.