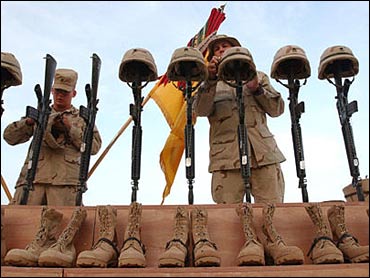 American troops in Iraq died in May at a rate of more than two per day, pushing the combined death count for April and May beyond 200, according to Pentagon figures.

For the National Guard and Reserve, whose part-time soldiers make up at least one-third of the 135,000 American troops in Iraq, the trend in casualties during May was especially troubling.

At least 22 citizen soldiers died, nearly one-third of all U.S. losses in May. As a percentage of the month's death toll, that is about double what it had been in most previous months of the war. It also shows that the Guard and Reserve are bearing an increasing combat load.

Three states — Arkansas, North Carolina and Washington — now have an Army National Guard combat brigade in Iraq. In the next rotation of troops that will begin late this summer, there will be at least three others, and probably a fourth, plus a National Guard division headquarters.

The most persistent killer, more than a year after President Bush declared major combat over, is the homemade roadside bomb. The military calls it an improvised explosive device. This month, they have killed least 19 soldiers, seven of them National Guardsmen.

The Marine Corps in March stopped reporting the circumstances of its casualties in Iraq, so the actual number of deaths by the homemade bombs this month is likely higher than the 19 reported by the Army.

"Our biggest menace now is the improvised explosive device," Maj. Gen. John Sattler, director of operations for the U.S. Central Command, said in a telephone interview with Pentagon reporters Friday.

He said multiple agencies of the U.S. government are searching for technological solutions, including electronic jammers that can stop the detonation of hidden bombs.

"The laws of physics conspire to keep these things hidden once they're emplaced, so unless you figure out through other means where they got put down, you're in trouble," says Michael O'Hanlon, a defense analyst at the Brookings Institution, a Washington think tank.

Months ago the Army sent a team of experts to Iraq to solve the problem, but to little apparent avail.

This kind of bomb took the life of the youngest female soldier to die in Iraq so far — Pfc. Leslie D. Jackson, 18, of Richmond, Va. She was killed in Baghdad on May 20 when her military vehicle was hit.

Others have been killed by snipers and suicide bombers, as well as mortars, rocket-propelled grenades and other weapons. Accidents, including two electrocutions, also have taken a toll.

At least 59 American troops died in May, according to the Pentagon's published tally. That figure does not include three Marines who died in action Saturday western Iraq.

May was deadlier than most previous months, but far less so than April, when the death toll was 136. That was by far the highest for any month since U.S. forces invaded in March 2003. The bloody fight for the city of Fallujah raged throughout April but has calmed down in the past few weeks.

In total, the Iraq conflict has taken the lives of more than 800 American troops so far, and last week the Pentagon reported that the number wounded in action is approaching 4,700.

Among the 22 citizen soldiers killed in May was Staff Sgt. William D. Chaney, of the Illinois Army National Guard. At age 59, he was the oldest soldier to die in Iraq since the invasion began.

Chaney, of Schaumburg, Ill., died May 18 at a U.S. military hospital in Germany of complications following surgery for a noncombat related condition that he developed while in Iraq.

A Navy Reserve unit, the Naval Mobile Construction Battalion 14, based in Jacksonville, Fla., suffered extensive losses in May. Five of its men were killed and 28 were wounded in a mortar attack on a Marine base near the city of Ramadi in western Iraq on May 2. Two days earlier, two other members of that unit were killed when their vehicle convoy was hit by a homemade bomb.
By Robert Burns