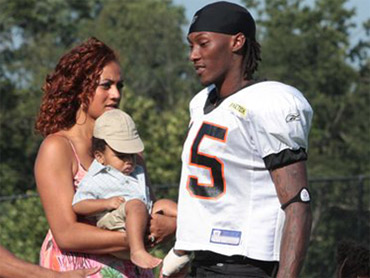 Cincinnati Bengals receiver Chris Henry died Thursday, one day after suffering serious injuries upon allegedly during a domestic dispute with his fiancee.

"We knew him in a different way than his public persona," Bengals owner Mike Brown said of the player who was suspended five times during his career. "He had worked through the troubles in his life and had finally seemingly reached the point where everything was going to blossom. And he was going to have the future we all wanted for him. It's painful to us. We feel it in our hearts, and we will miss him."

Police spokeswoman Rosalyn Harrington said homicide detectives have been assigned to the case but had no further information.

Henry was rushed to the hospital Wednesday after being found on a residential road. Witnesses said the dispute began at a home about a half-mile away, and Henry jumped into the bed of the pickup truck as his fiancee was driving away from the residence.

Police said at some point when she was driving, Henry "came out of the back of the vehicle."

CBS affiliate WBTV reports 911 tapes from Dec. 16 include two calls. The first is an unidentified woman calmly telling the operator that she is driving behind a yellow truck with "a black man on it with no shirt on, and he's got his arm in a cast and black pants on," she told a dispatcher.

"He's beating on the back of this truck window... I don't know if he's trying to break in or something. It just looks crazy. It's a girl driving it." She then says that the truck turned off of the street she was driving on and that she did not follow it.

The second 911 call is from an unidentified male who says he needs an ambulance because there is a man in his mid-20's lying in the road "definitely unconscious."

Read More on the Crimesider Blog

Henry is engaged to Loleini Tonga, and the couple has been raising three children. Tonga's MySpace page identifies herself as "Mrs. C. Henry" and has a picture of her next to a person who appears to be Henry. She also has a post from Tuesday talking about buying wedding rings. A neighbor said Wednesday that the Tonga family owns the home where police say the incident began. Charlotte is home to his fiancee's parents.

"We ask that you keep Chris' family - especially the young children he leaves behind - in your prayers," Henry's agent, Andy Simms of PlayersRep Sports said in a statement. "It is tragic when a life is taken so young. He was a man just realizing his potential, not just in football, but in life."

Authorities have not announced the cause of death. Mecklenburg County medical examiner investigator Carol Cormier said they were expecting to receive the body later Thursday.

The Bengals will wear a helmet sticker Sunday against San Diego to remember Henry.

When the players received word Henry had died, quarterback Carson Palmer called them together in the locker room and said they should dedicate the game and rest of the season to Henry and the wife of defensive coordinator Mike Zimmer, who died unexpectedly during the season.

Henry was away from the Bengals after breaking his left forearm during a win over Baltimore on Nov. 8. He had surgery and was placed on season-ending injured reserve following the game.

"We are greatly saddened by today's tragic news about the loss of Chris Henry," NFL commissioner Roger Goodell said. "Our thoughts and prayers go out to Chris' family, including his Bengals family. We have been in contact with the Bengals to offer our support through this difficult time.

"I ask you to keep Chris Henry and his family in your thoughts today."

Throughout his career, his temper and poor decisions got him in trouble.

He was ejected from a game and suspended for another while at West Virginia, where former coach Rich Rodriguez told Henry that he was an embarrassment to himself and the program. His reputation was already costing him - the Bengals were the only NFL team to bring him in for a pre-draft visit in 2005.

They found that his demeanor didn't match his reputation. Henry was shy and spoke in a quiet voice. They warned him that he had to stay in control if he was going to stay in the NFL. Then, they picked him in the third round.

In a sense, it was already a second chance.

"I'm worth the chance," Henry said, when he showed up the following weekend for a rookie minicamp. "I'm just happy they took me."

Henry become a vital part of the offense as a rookie, helping the Bengals reach the playoffs in 2005 with his ability to run past defenders to grab long passes. In the final month of the season, he also showed his other side, getting arrested for marijuana possession. After a playoff loss to Pittsburgh, he was arrested on a gun charge in Florida.

Henry and former Tennessee cornerback Adam "Pacman" Jones became the league's two most trouble-bound players. Commissioner Roger Goodell suspended both in 2007 - Jones for a full season, Henry for half of it - as part of a toughening of the league's conduct policy.

When Henry was arrested for a fifth time following that season on an assault charge, the Bengals decided they'd had enough. At his arraignment on April 3, 2008, Municipal Court Judge Bernie Bouchard called Henry "a one-man crime wave." He was released by the Bengals the same day.

It was a jolt to Henry, who had dreamed of an NFL career since high school, when he got the NFL logo tattooed on the back of his right hand. No team showed an interest in bringing him back. His career seemed finished.

Then, Brown - who refers to himself as "a redeemer" - changed his mind and gave him another chance.

"If you only knew him by hearsay, you'd think he's some kind of ogre," Brown said, during the Bengals' appearance on HBO's "Hard Knocks" series this summer. "It's not true. He's a good person. When you see him up close, you'll find that you'll like him. He'll be a soft-spoken, pleasant person."

This time, Henry seemed determined to stay out of trouble. After only 19 catches and two touchdowns in 12 games in the 2008 season, he set about making himself a topflight receiver again. He got into top shape and worked out with teammates in the offseason, showing more resolve than at any point in his career.

Henry also changed his personal life, spending more time with his fiancee and the three children they are raising. Teammates noticed a pronounced change in his demeanor.

"He's a great kid with a great heart," quarterback Carson Palmer said as training camp started. "He's changed his life around. He ran into some trouble, made some bad decisions, and realized that. He's sorry for them, apologized for them, and has done everything he can to make himself a better person. I'm just proud of him."

Before the 2009 season, Henry got a new tattoo that matched his new outlook. Below his left ear, in flowing one-inch script, was the world "Blessed."

"I kind of felt like I dug myself out of the hole and started doing the right things," Henry said in an interview with The Associated Press as training camp opened. "People say, 'How you feeling now Chris? You doing all right?' I just tell them I'm blessed. That's why I got it."

He caught a touchdown pass in each of Cincinnati's four preseason games. A thigh injury slowed him early in the season, and he had 12 catches for 236 yards - his 19.7-yard average per catch leads the team - when he broke his left arm during a win over Baltimore on Nov. 22, ending his season.

"He was doing everything right," receiver Chad Ochocinco said. "My grandma always says you never question the man upstairs on decisions he makes. Everyone makes mistakes, but I don't see how Chris was supposed to go already, especially when he was on the right path. Other than that, he's going to be missed."