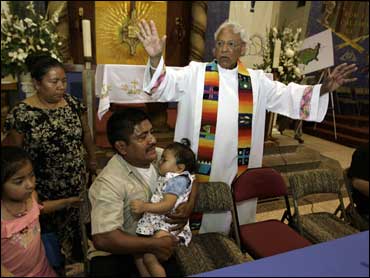 An effort being billed as a new sanctuary movement for immigrants is loosely based on a 1980s movement in which churches harbored Central American refugees fleeing wars in their home countries.

As religious leaders from different faiths across the nation announced the initiative Wednesday, the Rev. Donna Schaper of Judson Memorial Church defined it as "providing spiritual, moral, sometimes material and sometimes legal assistance to people who are either unjustly detained or deported."

But religious leaders in the five big U.S. cities initially involved in the effort said their support for immigrants might also include physical sanctuary.

On Wednesday, a Catholic church in Los Angeles and a Lutheran church in North Hollywood each sheltered one person, and churches in more than 50 cities nationwide plan to do so in coming months as part of the "New Sanctuary Movement."

"We want to put a human face to very complex immigration laws and awaken the consciousness of the human spirit," said Father Richard Estrada of Our Lady Queen of Angels Catholic Church in Los Angeles, where more than 30 priests, pastors, imams and rabbis blessed two illegal immigrants during a raucous ceremony attended by 300 people.

A Mexican man will be sheltered at the church, and another from Guatemala will be housed at San Pablo's Lutheran Church in North Hollywood.

The Guatemalan, a gardener who only gave his first name as Juan, said he worried about what might happen to his young daughters if he was deported. Both girls are U.S. citizens because they were born in the United States.

"I want to ask the politicians to see the suffering of the immigrant families," he said.

The initiation is also beginning in San Diego, Chicago and Seattle. It comes as immigration reform legislation has been stalled since last summer, and tens of thousands of illegal immigrants have been detained and deported in stepped-up immigration raids in recent months.

The U.S. Immigration and Customs Enforcement agency has not tried to arrest Elvira Arellano, an illegal immigrant who has taken shelter at a Methodist church in Chicago since August. Her son is a U.S. citizen and he has lobbied in the Mexican legislature on behalf of families that would be split if parents are deported.

ICE spokeswoman Virginia Kice declined to say whether agents would attempt to arrest others who take sanctuary in churches, although she noted agents had the authority to arrest anyone violating immigration law.

Rabbi Jonathan Singer of Temple Beth Am in Seattle said his congregation is just recognizing the need to advocate for the welfare of illegal immigrants.

"Many of our members have been in denial that they are part of the problem," Singer said, pointing out that immigrants often care for Americans' elderly parents, work in the factories that create the goods they buy and keep restaurants and hotels going.

In New York, churches will be aiding a Haitian man and a Chinese couple who are facing deportation and have children who are U.S. citizens, said Father Juan Carlos Ruiz.

"For us, sanctuary is an act of radical hospitality, the welcoming of the stranger who is like ourselves, the stranger in our midst, our neighbors, our friends," said Rabbi Michael Feinberg of the Greater New York Labor-Religion Coalition.

A Chinese-born restaurant worker who identified himself only as Joe said that if he and his wife, Mei, are deported, their two young children could be place in foster care.

"We do not want our family to be apart," he said.

The faith groups "don't seem to realize that they are being charitable with someone else's resources, and that's not charity," said Ira Mehlman of the Federation for American Immigration Reform, which favors limits on immigration.