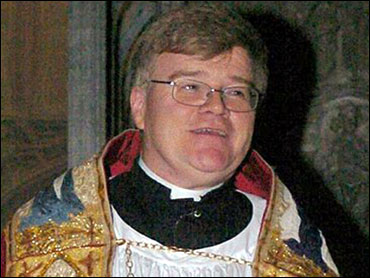 The Church of England may be on the verge of promoting a gay priest to bishop, a step that would widen the split over sexuality in the global Anglican Communion.

If that happens, it would appear to be a significant turnaround for Archbishop of Canterbury Rowan Williams, spiritual leader of the Church of England and the world's Anglicans, who recently imposed sanctions on the U.S. Episcopal Church for electing a lesbian bishop.

According to newspaper reports, Williams is prepared to back the elevation of the Very Rev. Jeffrey John, who withdrew seven years ago from an appointment as a suffragan (assistant) bishop in the face of a heated controversy about his homosexuality. Williams' office will not comment.

"I think the strength of the opposition is much weaker this time," Rev. Canon Giles Goddard, the chairman of Inclusive Church, said Tuesday. His group was founded by people disappointed by John's failure to become a bishop in 2003.

John, who is now dean of St. Albans Cathedral, might be seen as a more acceptable candidate than the U.S. bishop because he has declared he is celibate - and therefore not in violation of church teaching.

A Crown Nominations Commission, composed of 14 Church of England representatives, including Williams, met in secret Monday and Tuesday to choose two nominees to become bishop of Southwark diocese, the half of London that lies south of the River Thames.

Prime Minister David Cameron, who has spoken strongly in favor of equal rights for gays, will have the final decision about whom to recommend to Queen Elizabeth II, who will make the formal appointment. Southwark diocese says a decision may not be announced before October.

Williams has said nothing publicly about the issue.

After the Episcopal Church elected Mary Douglas Glasspool as an assistant bishop in Los Angeles, Williams moved to bar Episcopalians from representing the Anglican Communion on international ecumenical bodies. "This is simply to confirm what the Communion as a whole has come to regard as the acceptable limits of diversity in its practice," Williams said in a letter to the global church.

John, who is 57, has claimed celibacy despite being in a civil partnership. Neither Glasspool nor V. Gene Robinson, the Episcopal bishop of New Hampshire, has claimed to be celibate.

Rev. Paul Dawson, media officer for Reform, an evangelical grouping, objects that John has defended sexual gay relationships that are "Permanent, Faithful, Stable," as the title of one of John's books puts it.

"If you have a bishop who is effectively teaching what is against the Bible's clear teaching and what the Church of England says is its doctrinal position, if you have someone at the highest level saying this is a 'blessing,' this is a 'gift,' that raises all sorts of questions for the average churchgoer," Dawson said.

Appointments to bishoprics are the battleground in the Anglican debate about the role of women and homosexuals in the church.

The Church of England's governing General Synod will resume its debate about permitting female bishops this weekend as it continues trying to mollify conservatives who fought against making women priests and now resist what appears to be general support for women as bishops.

Anglican agonizing over sexuality has dogged Williams since 2002 when he became spiritual leader of the Church of England and of the Anglican Communion.

When John was nominated become bishop of Reading, Williams is believed to have yielded to conservative opposition.

"He cracked after two months of pressure and asked John to withdraw his name, establishing his reputation as a man who could be bullied," religion commentator Andrew Brown wrote in The Guardian newspaper.

"If he is beaten again, he is finished. If he wins, he will have shot the rapids and the Church of England will finally emerge from the turbulence of the last 30 years with a fairly clear and fairly coherent doctrine about sex."

The prime minister, in an interview with the gay magazine Attitude early this year, said his Conservative Party supported equal rights "whether you are male, female, black, white, urban, rural, straight or gay." The church, Cameron said, "has to do some of the things that the Conservative Party has been through - sorting this issue out and recognizing that full equality is a bottom line full essential."