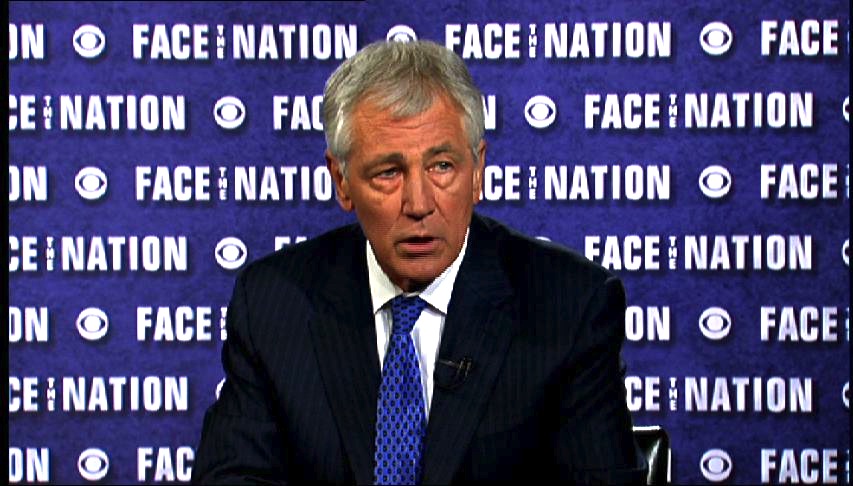 As Russian forces continue their infiltration of Ukraine's Crimean peninsula, raising fears of an all-out invasion of the former Soviet republic, Defense Secretary Chuck Hagel warned on CBS News' "Face the Nation" that it would be folly for Russia to meddle too forcefully.

"I think it would be a mistake, and this would set in motion so many different dynamics that are not in anyone's interests," Hagel said in an interview that was taped on Friday afternoon, before Russian troops moved into the Crimea, a strategically located peninsula on the Black Sea and the site of a large Russian naval base. The interview aired Sunday.

The Pentagon chief declined to spell out any specific steps the U.S. might take as a result of Russian forces entering other parts of Ukraine, but he added, "This could be a very dangerous situation if this continues in a very provocative way. We have many options, like any nations do. We're trying to deal with the diplomatic focus. That's the appropriate responsible approach and that's what we're going to continue."

Ukraine has been ransacked by chaos since former President Victor Yanukovych, a close Russian ally, was ousted last week by protesters seeking to reorient Ukraine away from Russia toward Europe. Yanukovych, who denounced his ouster as a "coup," is now in Moscow.

On Saturday, Russian President Vladimir Putin got the permission of the Russian parliament to expand Russia's troop presence into all of Ukraine. Russian lawmakers also urged Putin to recall Russia's ambassador to the U.S. in an act of protest against President Obama, who warned Russia to tread carefully on Friday.

Hagel described America's strategic interest in preventing a Russian invasion of Ukraine. "It's a sovereign, independent nation, and we support that sovereignty and that independence," he explained. "They have been a responsible new independent member of the global community since the implosion of the Soviet Union. We have European Union and NATO interests that border Ukraine. These are people who want to be free, who deserve to be free, deserve their own way of life, elected leaders. And so like our position with any sovereign free nation, that's the principle upon which the United States stands and I think all western countries in respecting people's rights."

In the interview, Hagel also weighed in on his recommended cuts to the Defense Department's budget, explaining them as a logical consequence of the receding tides of war.

"It's the first budget that's not a budget based on war footing," he said. "We've been at war for 13 years constantly, two wars. We're out of one war, Iraq, and we're coming out of the longest war we've ever been in, Afghanistan. Not unlike after every war the United States has been in, you reset your posture. You reset your assets. You reset your whole enterprise based on the new realities and based on preparing that institution for the challenges of the future."

Despite criticism from some Republican defense hawks on Capitol Hill, Hagel said the U.S. isn't retreating, but simply adapting to new realities.

"The terrorist threat that still is around the world will be with us, I suspect, for some time," he said. "We've got to figure out how best we do that, with strategic priorities that we've laid out."

Hagel cited a new focus on cyber warfare as evidence that the U.S. military is adjusting to the new threat environment.

"We've increased, for example, cyber assets, increased special operations," he said. "We're focusing on readiness, capability, our capacity, our ability to do the things that we need to do in the strategic interests of the strategic guidance that the president laid out in 2012."