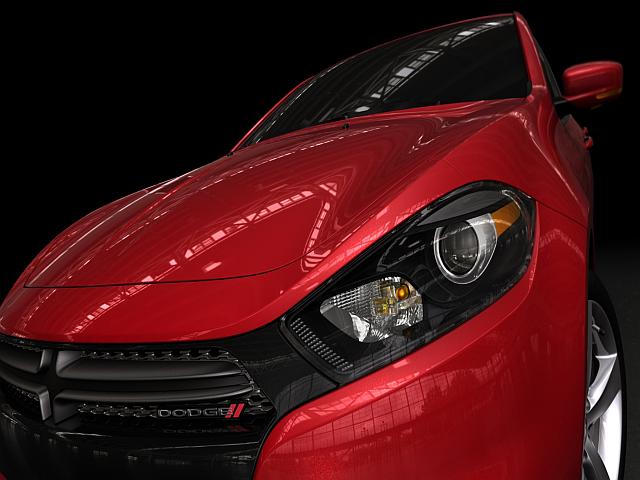 Chrysler is reviving the Dodge Dart name for a new compact car on sale next year.

Chrysler Group said  the Dart is based on the design of the Alfa Romeo Giulietta, much praised in Europe for its style and  road manners. Like Chrysler Group, Alfa Romeo is owned by Fiat. The Giuletta platform has been lengthened and widened for the U.S. entry. Full details of the new car will be announced in January at the Detroit auto show. (So far, Chrysler is releasing only the partial body photo pictured here.)

In light of strong compact sales, Chrysler is moving quickly to put the 2013 Dart on sale in the first half of next year. Gas prices are holding above $3 a gallon, and Americans are buying more high-MPG compacts than in the past. New, well-designed models with plenty of comfort and convenience features such as Chevrolet Cruze and Ford Fiesta and Focus have sold better than analysts predicted.

The Dart will come with three engine choices: 2.0-liter and 2.4-liter four-cylinder options and a 1.4-liter turbocharged four. In the Giuletta, that turbo engine is rated at 170 horsepower and the equivalent of 41 MPG on the highway.  (At least one model with a 40 MPG highway rating seems to have become a marketing necessity in this class. The Mazda 3 Skyactiv, the Chevrolet Cruze Eco, the Ford Focus SFE and the Hyundai Elantra all hit that mark.)

The original Dodge Dart was  introduced in 1960 and retired after 1976 models. Versions ranged from standard small cars to muscular Darts powered by a Hemi V-8 engine. The new Dart will replace the pedestrian, unloved Dodge Caliber as the compact entry.

In compliance with the bailout deal with the U.S. government that led to Fiat control of Chrysler, the Dart will be built in a Belvidere, Ill., plant. Building a high-mileage small-car in the U.S. will trigger transfer of an additional 5 percent of Chrysler stock from the government to Fiat under the terms of the deal.