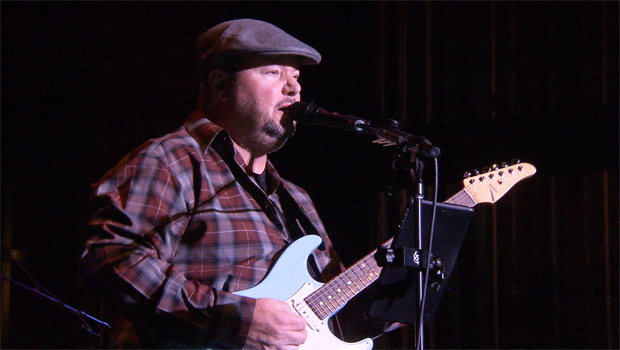 "Ride Like the Wind" was just one of several huge hits for Christopher Cross back in the 1980s. And though he may have stepped out of the spotlight for a while, he's still searching for that perfect summer song. Serena Altschul found him at his home in Austin, Texas:

Remember Christopher Cross? In the early 1980s, his brand of silky-soft rock sailed up the charts. His songs were unavoidable on FM radio -- and then as quickly as he burst on the scene, he seemed to vanish from it.

"I was going through TSA -- this has been a year, or maybe two years ago," Cross recalled. "And a woman took my boarding pass. And she said, 'Oh, Christopher Cross, there used to be a singer named that! He passed away! But he was a great singer.'

Luckily, reports of Christopher Cross' demise have been greatly exaggerated. The 63-year-old singer is alive and well and still touring -- that is, when he isn't recording at his home studio in Austin, Texas.

For a performer, it's hard to be modest after having a year like he did in 1980. His debut album, "Christopher Cross," went platinum five times over in the U.S. alone, and practically swept the Grammys, beating out Billy Joel, Barbara Streisand, Pink Floyd and Frank Sinatra for Album of the Year.

"It was an out-of-body experience almost," Cross said, "just to continually go up there and try to think of something to say. 'Cause I had no prepared remarks."

That night he would take home five Grammys in total. Three of the awards that night were for his introspective hit, "Sailing," which (according to Cross) isn't actually about sailing.

"I picked sailing as a metaphor because I used to do some sailing with an older kind of 'Big Brother' person in my life," he said. "It was sort of an escape for me as far as the chaos of my home.

"For me the song is really about transition through art. So when I say, 'The canvas can do miracles,' to me the canvas is a painter's canvas. So it's about the transition that you experience through art, whether it be dance, painting, music -- it's that interaction with art that we experience.

"But I always joke to people that if Al had taken me bowling, then it would've been, like, 'Bowling,'" he laughed. "Fortunately he took me to do something that was kind of fun."

The youngest of five in a military family that moved a lot, music was Cross' escape from a childhood that was at times chaotic.

"I was the singing drummer in little bands," he said. "But I learned pretty early on that the guitar players and the singer were up in the front where the girls were. So I knew that's where I needed to be. The front!"

Cross spent his twenties playing covers in jam bands in Texas. It was during one of those jams that magic happened -- his first hit, "Ride Like the Wind," was born.

"Remarkably, 'Ride Like the Wind' actually started as a jam, in the middle of a song by Paul McCartney called '1985' that Paul did with Wings. We used to play that song at the club, and when you had to play five sets a night, you'd extend things. I started doing this jam and going, 'Bah dah dah dahn. Dah dah dah dat.' And the crowd seemed to really react when we'd do it. And so, I thought, 'Wow, this is kinda cool!'"

In barely a year, Cross went from playing at fraternity parties to selling out stadiums.

Altschul asked, "What does it do to someone to have that kind of instant, meteoric rise to fame?"

"It's a pretty hard question to answer," Cross said, "because on one level it's sort of fantastic and I feel incredibly blessed. But on the other hand it was tough, because it all happened so quickly that, you know, there's no way to catch your breath or be prepared for it. You just get rushed along on this river of fame."

"I was waiting to go on to sing 'Arthur,'" Cross said, "and Bette Midler was waiting to come present my award after I came out. She had the envelope. And I don't know her, but I was so nervous. And I said, 'You know, you're so used to this. You're a big star. And I am so terrified right now.' And she said, 'Don't worry, kid. It's just you, the mic, and 70 million people!'"

In 1983 Cross cracked the Top 10 again with "Think of Laura" -- his last Top 10 hit. And for many, that would be the last they would hear from Christopher Cross, though he continued to put out records. Some 30-odd years, nine studio albums and two divorces later, Cross says his greatest success is his three children -- which he acknowledges in a song on his new album, "Secret Ladder."

"You know, I don't think I really made any mistakes per se," Cross replied. "But I think that my father used to always say, one of the tragedies of life is experience is non-transferable. And I don't think there's anything I could say to that Christopher Cross of the time. It's something that just comes with time and experience."

Today Cross and his music are edging back into the spotlight.

Tina Fey even nodded to Cross on the television show, "30 Rock":

Liz Lemon: "I know that I'm a sour person, and I don't like a lot of people, but I liked Floyd. And I guess in the back of my mind I thought we'd end up together someday that the whole thing would turn out like a movie where Christopher Cross sings a song like, 'All my days I've been waiting for you to come back home, in the moonlight of New York City.'"

... Which he turned into a song called "Lemon's Theme."

Through it all, Cross seems remarkably at peace with his place in pop culture.

"I wish I could go back and live it again," he told Altschul. "But at the same time, you know, some people will ask me, you know, 'What's it like to have all this early success?' And to a degree, you know, the success, it didn't continue 'cause it was such a meteoric thing.

"And I tell them, you know, I feel incredibly lucky to have had the success I've had, because it established my name and I'm still out touring today, and I'm here doing this incredible show which I love. So, you know, success at that level is a blessing no matter when and how it comes."