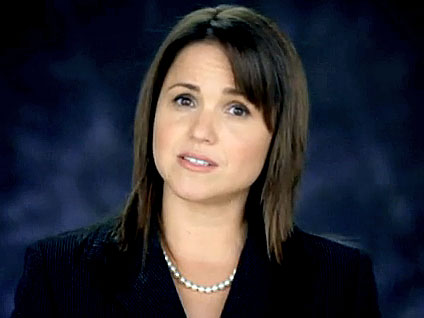 Delaware Republican Senate candidate Christine O'Donnell launched her first TV ad in her race against Democrat Chris Coons. The ad starts with O'Donnell declaring in a straightforward manner that she is not a witch.

"I'm not a witch," O'Donnell says, speaking directly into the camera in a slow delivery. "I'm nothing you've heard. I'm you. None of us are perfect, but none of us can be happy with what we see all around us, politicians who think spending, trading favors and backroom deals are the ways to stay in office. I'll go to Washington and do what you'd do. I'm Christine O'Donnell, and I approve this message. I'm you."

"By issuing her 'I am not a witch' denial quote, she has now entered that phrase into the political lexicon, along with other infamous denials," media consultant Brad Phillips said. Among those famous phrases are President Nixon's "I am not a crook," and President Clinton's "I did not have sexual relations with that woman."

"Spokespersons should almost never use the language of denial, and should turn their statements into positive ones instead," Phillips said.

O'Donnell was referencing the"witchcraft" statement she made on Bill Maher's "Politically Incorrect"during a 1999 appearance that was not aired.

"I dabbled into witchcraft -- I never joined a coven. But I did, I did. ... I dabbled into witchcraft. I hung around people who were doing these things. I'm not making this stuff up. I know what they told me they do. . . ., " she said. "One of my first dates with a witch was on a Satanic altar, and I didn't know it. I mean, there's little blood there and stuff like that. ... We went to a movie and then had a midnight picnic on a Satanic altar."

The new ad was launched on the same day that stories circulated about O'Donnell saying that China has "carefully thought out a strategic plan to take over America" during her 2006 Senate campaign. She added that she couldn't elaborate. "I wish I wasn't privy to some of the classified information that I am privy to," she said according to an Associated Press report.

The ad is being aired in three Delaware counties (New Castle, Kent and Sussex), as well as Philadelphia, PA and Salisbury, MD markets.

According to most recent polls O'Donnell is trailing Coons by about 15 points.