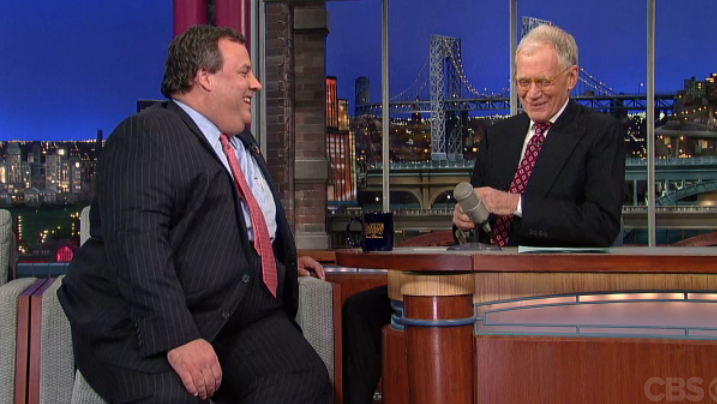 New Jersey Governor Chris Christie doesn't put up with much guff from reporters, but the famously brash Republican governor showed his laid back side last night in an interview with CBS' "The Late Show," laughing off host David Letterman's repeated questions about his weight, and answering them with fat jokes of his own.

"I love you, Dave," Christie told Letterman, shortly before taking out and snacking on what appeared to be a jelly donut. "A deep and abiding love."

Christie, who has brushed off past suggestions that his weight might impact his abilities as a politician - either in his current station as governor or, potentially, a higher office - told Letterman his health is "startlingly good" and that he has normal blood sugar and cholesterol both.

"I'm basically the healthiest fat guy you've ever seen in your life," he said.

He also insisted that he's not bothered by Letterman's relentless fat jokes targeting him, and actually brought a couple of his favorites to read back to the host.

"From my perspective, if the joke is funny, I laugh," Christie said. "Even if it's about me. If it's not funny, I don't laugh. But I've never felt like it was, you know, anything that really bugged me all that much."

Pivoting to a more serious note, the two discussed the state of New Jersey in the wake of superstorm Sandy, which Christie described as "still awful."

"We still have 42,000 families tonight who are homeless" as a result of Sandy, he told Letterman. He also said that nearly 82,000 businesses are still out of commission.

The governor stressed efforts he's making to ensure that properties are rebuilt stronger and that standards are higher.

"We can't have this happen again," he said.

As for a possible presidential bid in 2016, Christie says he's "nowhere near" making a decision.

"I think everybody understands that if you see something you think you can do and you can do it well then people give you an opportunity - a fair opportunity to do it," he told Letterman. "But I'm nowhere near making that decision yet, at all. I mean, I think anybody who tries to plan in politics that far in advance is crazy."

"I love being governor and I want to stay as governor," he said.

Plus, he says, his family remains "noncommittal" about the idea.

"They were totally against it the last time, I can tell you that," he said. "The last time, we took a family vote, and it was six to nothing against, which is a problem."