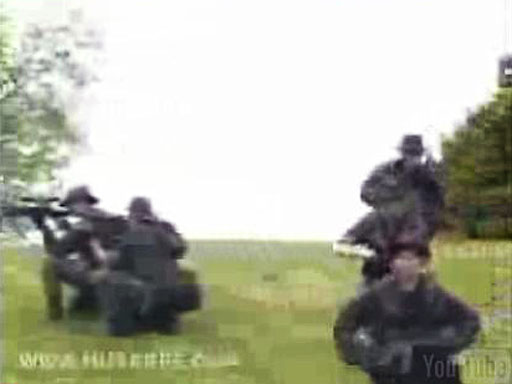 DETROIT, Mich. (CBS/AP) The leader of the Southeast Michigan Volunteer Militia, Michael Lackomar, is distancing his organization from Hutaree, the Christian militia group that was the focus of multiple raids by the FBI Saturday, saying they are neither Christian nor a militia.

Despite multiple quotes from the bible on a website reportedly run by Hutaree, which the site says means "Christian warrior," Lackomar says he would not classify the group as Christian.

"What we saw was we saw a small group of people that were well-equipped, put forth a good appearance, but were kind of rough around the edges in the technique," Lackomar said Monday. "They got some pointers from us in their training, and we started to dig into who they were, what they were posting and decided that it really wasn't the best thing to associate ourselves with."

In fact, yesterday Lackomar told the press that members of Hutaree contacted members of his militia in the midst of the FBI raid. "They said they were under attack by the ATF and wanted a place to hide," Lackomar said. "My team leader said, 'No thanks."'

Federal authorities on Monday charged nine members of Hutaree with conspiring to kill a Michigan law enforcement officer and then kill other officers at the funeral. Eight of the men were arrested after a series of raids by the FBI in three states, including Ohio, Indiana and Michigan. The ninth man was arrested Monday night.

The website, hutaree.com, also has links to videos showing armed men engaged in what appear to be training exercises. The website says Hutaree members are Christian "soldiers" who are arming themselves and training in anticipation of the coming of the Anti-Christ, which they believe is imminent. Investigators allege that members of Hutaree view local, state, and federal law enforcement personnel as a "brotherhood," and planned to attack them as part of an armed struggle against the U.S. government.

"This is a group that I would classify as neither a militia or a Christian group," Lackomar told CNN. "They're really a fringe group outside of anything we do. They're more of a private army or a terrorist organization or really just a criminal organization."