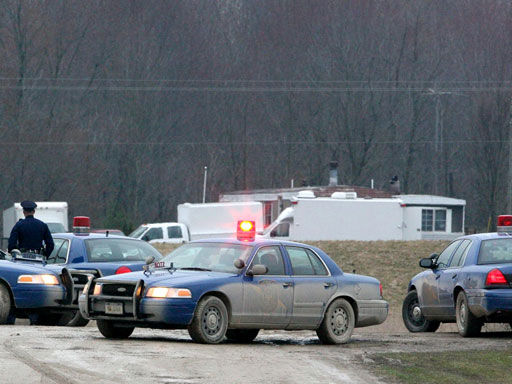 WASHINGTON (CBS/AP) The Christian militia group, Hutaree, planned an elaborate attack on local and state police, who they saw as the "brotherhood" of an enemy government, U.S. Attorney Barbara McQuade announced Monday.

Nine men, including group leader, David Brian Stone, were charged with seditious conspiracy, possessing a firearm during a crime of violence, teaching the use of explosives, and attempting to use a weapon of mass destruction - homemade bombs.

McQuade said that Stone, known within the group as "Captain Hutaree," allegedly conspired with at least eight other members to kill police officers, and then attack the officers' funeral with homemade bombs in the hopes of killing more law enforcement personnel. The attacks were allegedly planned to take place sometime in April.

Other alleged scenarios included a fake emergency phone call to lure an officer to his or her death, or an attack on the family of a police officer.

After such attacks, the group allegedly planned to retreat to "rally points" protected by trip-wired improvised explosive devices, or IEDs, for what they expected would become a violent standoff with law enforcement personnel, according to the indictment.

Andrew Arena, head of the FBI's field office in Detroit, said the case "is an example of radical and extremist fringe groups which can be found throughout our society. The FBI takes such extremist groups seriously, especially those who would target innocent citizens and the law enforcement officers who protect the citizens of the United States."

On its Web site, Hutaree quotes several Bible passages and states: "We believe that one day, as prophecy says, there will be an Anti-Christ. ... Jesus wanted us to be ready to defend ourselves using the sword and stay alive using equipment."

MORE ON CRIMESIDER
March 29, 2010 - Hutaree Website: Christian Militia Raided by FBI were "Preparing for the Anti-Christ"