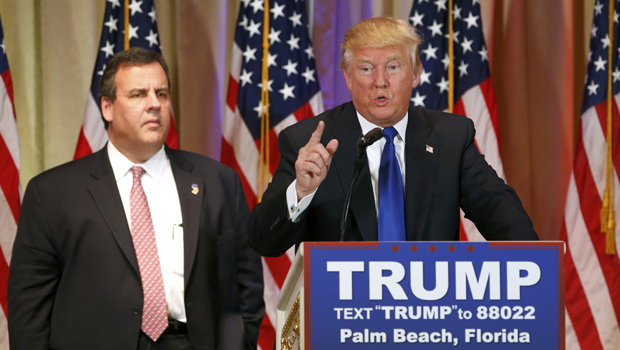 New Jersey Gov. Chris Christie is defending his endorsement of Donald Trump, just as the governor continues to received flak over his support of the Republican front-runner on the campaign trail.

"I was standing up there supporting the person who I believe is the best person to beat Hillary Clinton of the remaining Republican candidates and it's why I endorsed him," Christie told reporters Thursday, referring to Trump's Super Tuesday victory press conference.

Christie, who stood behind Trump on Tuesday, drew much social media mockery for his subdued demeanor that night. Some Twitter users even jokingly suggested that Christie looked as if he was being held "hostage" by the Trump campaign.

"I understand that everyone had a lot of fun with it," Christie said of the Twitter jabs. "I've had a lot of fun on the Internet with people at times, too. It's fine. But I want everybody to know, for those who were concerned, I wasn't being held hostage. I wasn't upset. I wasn't angry. I wasn't despondent. I wasn't anything other than happy that we had done as well as we had done that night and listening to someone give a press conference in front of the press corps."

He addressed the speech given by Mitt Romney, the GOP's 2012 presidential nominee, who denounced Trump as "a phony" and a "fraud" on Thursday.

"We had a difference of opinion in the presidential race -- that's the way it goes in a primary," Christie said. "It will not change the extraordinary respect I have for Governor Romney."

The former Republican candidate also took questions regarding recent newspaper editorials skewering his New Jersey record and calling for him to resign as governor.

"They're trying to be relevant as their circulation declines, as their readership declines," Christie said of the news outlets, which include NJ.com and several Gannett-owned publications. "I'm here, I'm back to work, I've been back 22 days since the presidential campaign and i've been here 19 of the 22 days at work."

"Will there be occasions that I go out on the campaign trail for Donald Trump?" he asked. "Yeah, but that will be on occasion."