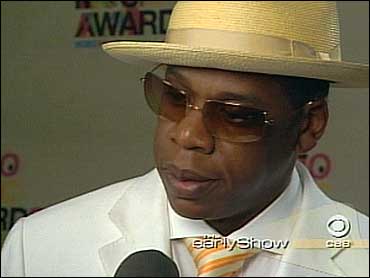 It is hard to tell if it was the heat or fallout from Janet Jackson, but Sunday night's show was actually a rather subdued affair, at least by Video Music Awards standards.

Still, there were some fun moments and some spectacular performances. And if there was any message, it was political. 'Vote or Die,' producer P Diddy's campaign to get young Americans to the polls for the presidential elections, was given plenty of publicity.

"I want to have everybody go out and vote on Nov. 2," Puff Daddy said.

Asked why voting is so important for him, Jay-Z told The Early Show correspondent Tracy Smith, "I never realized that one vote can make a difference."

But when the candidates' kids joined in, they got the oddest reception of the night: a lot of boos.

Vanessa and Alexandra Kerry were on stage in Miami while the Bush twins, Barbara and Jenna, were seen via video remote from New York. They all urged viewers to get out and vote and, of course, to vote for their respective fathers.

The change of scenery for the awards, typically held in New York or Los Angeles, helped raise the decadence level at the already raucous, celebrity-soaked affair, held at the downtown AmericanAirlines Arena.

The 90-degree heat was a good excuse to wear as little as possible, not that you need one at the VMAs.

Usher showed up dressed like an angel. But during his performance he took his shirt off. He warmed up the show, opening with his hit "Yeah," although with the thermometer going through the roof, his more recent track "Burn" might have been more appropriate.

The R&B crooner picked up a couple of awards and stole the show, winning Best Dance Video and Best Male Video. It was the first time he was nominated.

"This is my first time coming up here - let me take my time with this," a beaming Usher said. "I'm so damned happy right now, I don't wanna leave."

Outkast won four awards including Best Video. "We're partying," he told Smith about his plans after the awards show.

Jay-Z tied Outkast for the most awards, also winning four. No Doubt took home Best Pop Video for "It's My Life," along with Best Group Video, the band's third win in that category over the years.

A blonde Beyonce accepted the Best Female Video for the second year in a row, this time for "Naughty Girl."

The Viewer's Choice Award, one of the ceremony's highest honours, went to Linkin Park for its anime video "Breaking the Habit."

For the first time since Hootie and the Blowfish in 1995, a rock band won Best New Artist in a Video - Maroon 5 for "This Love."

Other winners included Jet's "Are You Gonna Be My Girl" for Best Rock Video, Franz Ferdinand's "Take Me Out" for Breakthrough Video, Black Eyed Peas' "Hey Mama" for Best Choreography, and Alicia Keys' "If I Ain't Got You" for Best R&B Video.

If there were an award for best performance, Alicia Keys might've won it with her medley, which began with her crooning "If I Ain't Got You" and morphed into a funky duet of "Higher Ground" featuring one of her idols, Stevie Wonder, on piano and Lenny Kravitz (shirtless, but with wings!) on guitar.

"Let's just say I'm doing something I've always dreamed of doing since I was a little girl," she told Smith.

Also impressive on the piano was none other than Nelly, who kicked off "Tilt Ya Head Back" playing the keys while Christina Aguilera sang and danced above him. The "Chicago"-inspired number also featured a couple of impressive dance breakdowns, including a tap routine.

Before the show, a demure Aguilera was coy about her performance with Nelly.

Asked if it is naughty or nice, Aguilera says, "Oh we always throw in a little bit of both." Nelly added, "You'll have to wait and see. I'm not giving it up. But it's hot. It's hot."

Acclaimed rap newcomer Kanye West staged a dramatic version of "Jesus Walks," then instead of using a Chaka Khan sample for his hit "Through the Wire," brought the R&B veteran onstage to sing the real thing.

There was also an appearance by uber-twins Mary Kate and Ashley Olsen. Mary Kate, who recently was treated for an eating disorder, alluded to her ordeal before introducing Jessica Simpson "Thank you to everyone - you have been very supportive for the last couple of months," said Mary Kate.

It was one of the few subdued moments during the lavish night.

Perhaps the most surreal, and bizarre, performance came from the Polyphonic Spree, the twenty-something member rock choir that performed in multicoloured, choirlike robes. They looked like members of a lost cult from the 1970s.

For the final number, the American Airlines Arena was made to look like a political convention, with a sea of fans holding up pro-vote signs, and red, white and blue balloons dropping from the rafters.