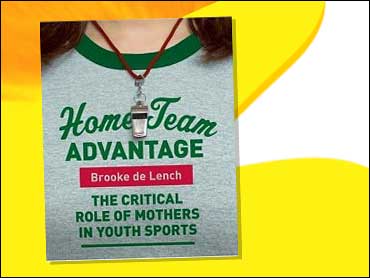 There are more kids than ever playing organized sports. An estimated 58 million children have signed up for sports programs this year. But how do you find a program that's right for you? Brooke de Lench, the mother of triplet sons, is the founder of Momsteam.com and the author of "Home Team Advantage: The Critical Role of Mothers in Youth Sports."

De Lench visited The Early Show on Monday to discuss some of the problems with organized sports today and how involved a parent should be in their child's sports programs.

De Lench told co-anchor Hannah Storm that when her boys began playing organized sports she was upset by what she saw on the field. "Mothers would stand on the sidelines and we'd be very upset about the safety, the lack of safety, the lack of organization, communication. Too much competition," she said.

De Lench said there's a disconnect between moms and the sports their children are involved in. "It's totally about competition," said de Lench. "There's no collaboration or communication. Mothers are in no mom's land. We're really not allowed to participate."

De Lench thinks that game play is different when women are absent from the playing field. "For men, it really is hard wired for them to be winners and is competitive. That's great. But without what women bring to sports, that collaboration, that cooperation," she said.

When your child joins a sports program, de Lench suggests you do a little investigating.

"We have to know if they are trained in CPR," she said. "The most up to date CPR, which is now 30 beats instead of 15. Make sure that the coach knows about the sport that he or she is coaching. And make sure that they know about the safety issues associated with that particular sport."

In terms of physical safety of children, de Lench said that the most important thing is to make sure kids have a pre-participation physical evaluation. "It's not the old school physical," she said. "But it is now a 45-question document put together by six medical societies that asks the very critical questions that will determine if a child has an undetected heart situation or any other problem."

De Lench said it's also important to determine if the team is coach-centered or child-centered.

"Number one, will the coach let us come and watch the practices? If a coach says, 'No, you've got to stay away.' That's a red flag," she said. "A child-centered approach is really going to put the children first. They're not going to say, 'it's up to me. I'm coaching. Don't ask the questions. What do you know about football, Mom? Go to the sideline.' That's not great. We need to make sure that the coaches are there for the safety of our children."

De Lench said it's important to be proactive in regard to your child's sports program. "We need not be afraid," she said. "We need to really get out and ask the questions that are going to keep our kids safe and happy."