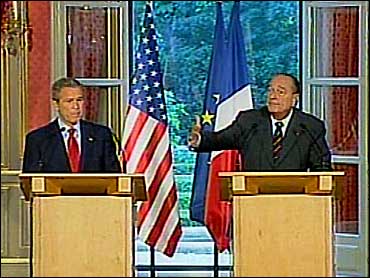 President Bush and French President Jacques Chirac sought to move beyond bitter differences over Iraq on Saturday, with both suggesting a U.N. deal on post-occupation Iraq may be close. But the French leader again doubted America's justification for the war and said the situation remains "extremely precarious."

Still, despite exhibits of testiness on both sides at a joint news conference at the Elysee Palace, Chirac told Mr. Bush at their private meeting that he believed the evolving U.N. resolution would pass unanimously, according to a U.S. official familiar with the session who spoke on condition of anonymity.

Buchan said the president planned to participate in D-Day ceremonies in Normandy on Sunday and then fly back to the United States for an international economic summit in Georgia.

She said it was not known at this point whether Mr. Bush would change his travel plans because of Mr. Reagan's death.

The public U.S.-French divisions stood in contrast with the show of solidarity earlier in the day in Rome between Mr. Bush and Italian Prime Minister Silvio Berlusconi.

On the eve of celebrations marking the 60th anniversary of D-Day, Mr. Bush and Chirac highlighted areas of agreement, from Afghanistan to the Middle East, from Haiti to Africa. "Free nations working together can overcome danger," Mr. Bush said, citing the lessons of World War II.

Calling his talks with Mr. Bush "trusting" and "sincere," Chirac endorsed many of Mr. Bush's comments, but was critical about U.S. policy in Iraq. "There is a degree of chaos prevailing," he said.

Chirac declined to echo Mr. Bush's recent efforts to link Iraq and the broader war on terror with the liberation of Europe that D-Day made possible.

Chirac said he understood why Mr. Bush has been comparing the Iraq war to the liberation of Europe in World War II, given this weekend's celebrations. But Chirac said "it is very difficult to compare historical situations that differ because history is not repetitive."

Chirac said he was uncertain the ousted Iraqi president had weapons of mass destruction before the U.S.-led invasion in March 2003. That was a chief justification Mr. Bush gave for the war; no stockpiles of such weapons have been found since.

"I have always said that I have no information that would lead me to believe that there were or were not for that matter weapons of mass destruction in Iraq," Chirac said.

About 12,000 demonstrators, many of them students, marched through central Paris to protest Mr. Bush's policies and denounce the invasion of Iraq.

Led by the thumping beat of techno music piped out from sound trucks, the protest began at the historic Place de la Bastille and slowly moved across the Right Bank to the Place de la Republique.

"The coalition in Iraq is not an army of liberation. It's an army of occupation," said 19-year-old university student Maxime Sorin.

Earlier in the day in Rome, Mr. Bush said he assured Berlusconi that Italy's concerns for full Iraqi sovereignty would be reflected in the pending U.N. Security Council resolution.

"I assured him that not only that was our intention, that would be - his desires would be reflected in the United Nations Security Council resolution," Mr. Bush said.

Berlusconi, one of Mr. Bush's staunchest allies, pledged Saturday that Italy would stand with the United States and keep soldiers in Iraq. He noted that Italian troops were trying to keep peace in Iraq, much as they have done in Bosnia, Kosovo and Afghanistan.

"If anyone were to think that it would be advisable to withdraw troops from Iraq," Berlusconi said, "then we would have to do the same from all the other countries where we have our troops. And we think that is the opposite of what we should to secure the peace.

Mr. Bush met Friday with Pope John Paul II, who reminded him of the Vatican's opposition to the war.

Tens of thousands of protesters also turned up in Rome Friday, but the city was mostly quiet Saturday.

That, and a return letter by the coalition to the Iraqi leader, will constitute a military structure for future operations in Iraq, Powell said.

He said the letters make clear that Iraq will have jurisdiction over its own military forces, but not those of other nations, including the United States. Powell said Allawi's letter proposes setting up Iraqi committees that will monitor and work closely with a U.S.-led coalition forces throughout the nation.

Chirac, whose country has a veto on the Security Council, wants a fixed timetable for withdrawing U.S.-led forces from Iraq.

Chirac withheld endorsing a new U.S. agreement with Iraq's interim government, saying some details remain to be worked out. But, he said, "I think we have progressed, I think we have moved forward ... I hope all of this can take place very speedily."

CBS News Correspondent Mark Knoller reports that Powell said a U.N. deal could be nailed down in the next couple of days. In Powell's words: "We are very very close."

Mr. Bush and Chirac also pledged to cooperate on resolving the Israeli-Palestinian conflict. Mr. Bush made the case for democratic reforms throughout the Middle East; that is his priority at a conference this coming week on Sea Island, Georgia, of the seven major industrialized democracies and Russia.

Mr. Bush and Chirac both spoke of the American sacrifices to liberate France from Nazi tyranny 60 years ago.

At ceremonies on Sunday in Normandy, Chirac said he will tell Americans, "`France says thank you, and that France does not forget."' Bush said he expected it to be a "spectacular day."

Later, Chirac and his wife escorted Mr. Bush and the first lady down the steps from the palace. The two men exchanged kisses on both cheeks with the other's wife and then Chirac walked down a few more steps to the presidential limousine. Mr. Bush turned to the French president and said, "Jacques, thank you."

Once inside the limousine Mr. Bush saluted his host.

At the news conference, Mr. Bush turned curt when a French reporter asked him why his policies were "pushing your country and France to divorce," noting that former President John F. Kennedy had suggested that everyone has two countries - his own and France.

"To paraphrase President Kennedy, there's America and then there's Texas," Mr. Bush retorted. He did not elaborate. The purported Kennedy comment was actually originally uttered by President Thomas Jefferson.

Aides later said Mr. Bush was just trying to suggest there was another side to matters.