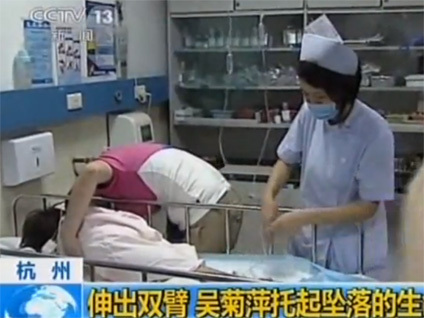 BEIJING - A Chinese press report says a toddler who fell 10 stories and survived after being caught by a passer-by has been singing songs.

It's seen as progress the little girl is recovering from her extensive head injuries.

She woke up from a 10-day coma earlier this week.

Her mother says Niu Niu has sung four songs to her. Xinhua News Agency quoted her mother Sunday as saying it indicates her brain functions are recovering. Her mother had sung several of Niu Niu's favorite songs to try to wake her from the coma.

Xinhua quoted her doctor as saying the left side of her body is still partially paralyzed, but there is hope she will recover.