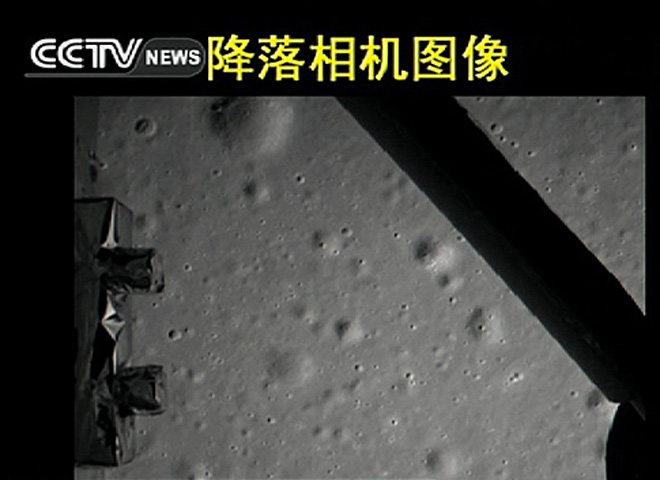 An unmanned Chinese spacecraft, carrying a suite of instruments and a small rover named Yutu, or "Jade Rabbit," settled to an on-target touchdown on the moon Saturday, the first such lunar landing in 37 years and a major achievement for the ambitious Chinese space program.

As the four-legged Chang'e-3 spacecraft descended to its landing site in or near Sinus Iridum, the Bay of Rainbows, a downward-pointing camera sent back pictures of the surface all the way through touchdown around 8:12 a.m. EST (GMT-5), prompting cheers and applause in China's mission control center. A few minutes later, the lander's two solar panels deployed.

Named after a mythical Chinese goddess, Chang'e-3 is the first Chinese spacecraft to land on another extraterrestrial body and the first moon lander since the former Soviet Union's Luna 24 sample return mission in 1976.

Chang'e-3 is equipped with a stereo imager, a telescope and an extreme ultraviolet camera for astronomical and Earth observations. Its solar panels provide electricity to power its systems while a radioisotope thermoelectric generator provides the heat needed to keep its electrical systems warm during the two-week-long lunar night.

The 265-pound Yutu rover, mounted atop the lander for the trip to the moon, is equipped with cameras and a ground-penetrating radar to probe the structure of the lunar crust to depths of up to 300 feet or so.

If all goes well, the six-wheel rover will roll onto a set of articulating panels Sunday and be lowered to the surface to begin independent operations.

"It's very difficult to soft land on the moon because there's no atmosphere," Ouyang Ziyuan, a senior advisor for China's lunar probe project, told CCTV before launch. "Previously the U.S. and the former Soviet Union both achieved this, but it was by either just a lander or just a rover.

"China will be the first country to land a rover and a lander on the moon at the same time. The lander will start working immediately after landing, by observing space using an optical telescope. So this will be a combined exploration of the moon by the lander and the rover."

The mission got underway Dec. 1 with a picture-perfect launch from the Xichang Satellite Launch Center aboard a Long March 3B rocket. After a five-day voyage, Chang'e-3 braked into an initial 62-mile-high orbit around the moon. Four days later, the spacecraft moved into an elliptical orbit and then dropped the low point of the orbit to just 9.3 miles above the lunar surface.

Chang'e-3 descended to the surface Saturday using a variable-thrust engine that fired for about 12 minutes. During the descent, the flight computer autonomously evaluated sensor data to make sure the landing site was level and free of any large boulders or other obstructions. The main engine shut down several feet above the surface for a free fall to touchdown.

"I believe within two to three years we will be able to carry out very systematic and accurate research with the samples," Ouyang Ziyuan said.

"For now, one tough test the Chang'e-3 mission must pass is withstanding extreme cold conditions. The rover's wings collect solar energy during the day, which allow it to function. But at night none of the equipment works, because the temperature drops as low as minus 180 degree Celsius. Electronic devices are damaged if they're colder than minus 40 degrees.

"So we will use atomic energy storage batteries to heat them up at night and keep them operational," he said. "The batteries have to be able to work for long periods at a time, as one night on the moon lasts two full weeks on Earth."