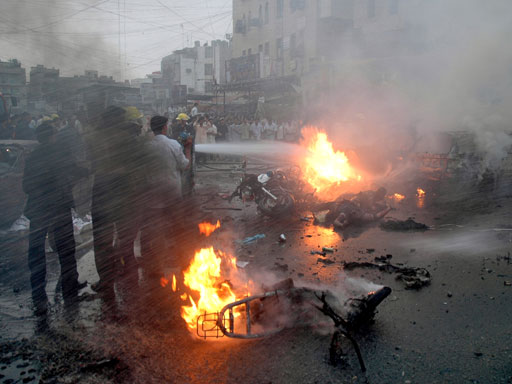 China has high hopes that it may get to host the 2008 Summer Olympic Games.

But as an International Olympic Committee delegation wraps up an inspection tour of the country, it could be a homegrown obstacle that stands in the way: China's own record on human rights, including its fierce campaign against the secretive movement called Falun Gong.

Over and over, Chinese television shows pictures that shocked the world— people claiming to be Falun Gong members setting themselves on fire in Tiananmen Square.

It's part of an escalating Chinese propaganda war and every night there is another dose of it on TV, reports CBS News Correspondent Barry Petersen.

There are petition drives against what authorities call an evil cult. Former members are shown thanking the government for rescuing them.

But Falun Gong says it is a spiritual movement, teaching exercises that replace doctors and medicine, and shunning violence of any kind.

What got the group banned was a massive surprise protest in April, 1999. China's leaders were stunned that any group could secretly rally thousands against the government.

Since then, says Falun Gong, hundreds have been killed, and tens of thousands have been arrested, including Feng Yuan's mother.

"They're being forced to go through some kind of physical torture and also mental brainwash."

And the Chinese are furious at the U.S. for allowing Falun Gong's leader to live safely in America.

"That is a decision against human rights because Falun Gong really caused many people's deaths in this country," says professor Yan Xuetong of Tsinghau University.

The level of heated rhetoric in China has now reached a point where some commentators from the state-controlled press are suggesting that Falun Gong is a CIA-funded plot to bring down the Communist party. But even more reasoned Chinese say that on this issue, America has no business taking the moral high ground.

Look, they say, at how America destroyed the Branch Davidian cult outside Waco, Texas— in a hail of gunfire.

Falun Gong may be about religion, but the reaction by China's leaders is all about fear.

The group is a reminder that those who cannot be controlled still face the old Communist party fallbacks: persecution and death.