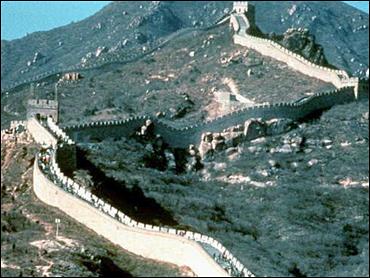 The Great Wall of China just got a little bit greater.

A new 50-mile section of China's iconic structure has been discovered in northwestern China, centuries after being submerged by the sands that move across the arid area each year, the Chinese government said Wednesday.

The segment, on the southern slope of Helan Mountain in the Ningxia region, sits about 25 miles west of the regional capital of Yinchuan, the official Xinhua News Agency reported.

That part of the wall was built in 1531 and gradually buried by moving sand, Xinhua said. When the section was repaired in 1540, three watchtowers were added at different parts of the section, which meanders from east to west, the agency said.

The 21-foot-high chunk of wall is 20 feet wide at its base and 11 feet wide at the top. It has seven drainage ditches and parapets at both flanks of the wall, Xinhua said.

The government said some parts were more fortified than others, being protected by stone segments that formed a "double-layered wall."

The Great Wall, from its starting point in the northwestern province of Gansu to Shanhaiguan Pass on the shores of Bohai Bay along China's east coast, is believed to span up to 3,700 miles through the north, which dynastic China's emperors considered most vulnerable to attack.

A series of dynasties built the Great Wall over the course of centuries to protect China from outside invasions. But the Ningxia region in particular long has been China's front line and a place deemed worthy of special fortification.

The freshly uncovered portion is near Great Wall sections built in what was known as the Period of the Warring States (475 B.C.-221 B.C.) and the following Qin, Han, Sui and Ming dynasties, the Chinese government said. Wall sections in that area were built with materials including sand, mud, stone and crudely fashioned bricks.

The surfacing of a new portion of the Great Wall is not unheard of.

In August, archaeologists said they uncovered 2,000-year-old sections of the wall in the desert northwest - including two fortified castles dating to the Han dynasty, which lasted from 206 B.C. to A.D. 220.

The wall's modern sections around the Chinese capital date from the Ming Dynasty (1368-1644). Some parts have been restored since the Communist Party took power in 1949, and several - including the most popular, Badaling, just north of Beijing - draw hundreds of thousands of visitors each year.

In recent months, Chinese and foreigners alike have underscored the importance of preserving the decaying sections of the Great Wall and preventing stronger sections from being worn down by tourists and careless visitors.