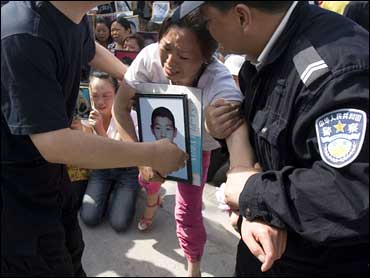 More than 19,000 schoolchildren died in a massive earthquake that struck Sichuan province in May, China acknowledged Friday for the first time.

The earthquake left nearly 90,000 people dead or missing, but the government has never before said how many of the casualties were students. Most of them perished when their shoddily built elementary and secondary schools collapsed.

Their deaths became a sensitive political issue for the government, with the parents of dead children staging protests to demand investigations. Many parents said they have been subjected to intimidation and financial inducements to keep them silent.

The student death toll of 19,065 was presented by Wei Hong, the executive vice governor of Sichuan, at a news conference on preparations for the winter in the quake zone.

Wei said millions of those displaced in the earthquake still need quilts and repairs to their homes if they are to survive the coming winter, which is expected to be unusually cold.

The earthquake, which was centered in the southwestern province of Sichuan, displaced millions and left China struggling to carry out reconstruction work.

Wei said relief work was important because experts were predicting temperatures would be slightly lower this winter in the area compared to previous years.

"During the post-disaster period of relocations, we have placed at the core the work of making sure that thousands of affected people, especially those living in extremely cold and remote rural areas, will live safely and warmly through this wintertime," Wei said.

He said that although millions of cotton quilts and clothing had been donated already, more were still needed.

Wei said that as of Nov. 12, nearly 200,000 homes had been rebuilt, 685,000 homes were under reconstruction, but that another 1.94 million households still needed to be rebuilt or repaired.

More than 1,300 schools have been reconstructed or are currently being worked on, and site selection had started for relocating 25 townships, including Beichuan and Wenchuan, two of the most devastated areas.