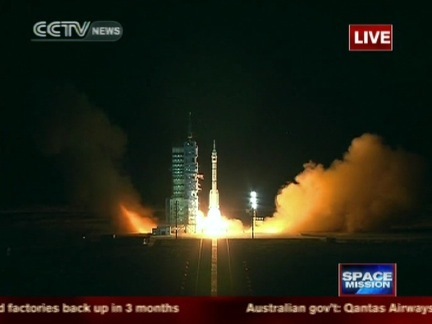 A Chinese Long March-2F rocket successfully boosted an unmanned Shenzhou capsule into orbit today for an automated rendezvous and docking with a prototype space station module, a key milestone in China's drive to build an operational station later this decade.

The towering Long March, equipped with four liquid-fueled strap-on boosters, ignited with a flash at 5:58 p.m. EDT (GMT-4) and quickly climbed away from its pad at the Jiuquan Satellite Launch Center in north central China.

The launch was carried live by Chinese television and nine minutes after takeoff, a camera mounted on the spacecraft showed the Shenzhou-8 spacecraft separating from its booster. A few minutes later, the capsule's two solar panels could be seen unfolding and locking in place.

Live shots from inside the spacecraft's descent module showed multiple computer displays and controls, along with Chinese ribbons and decorations. Chinese mission managers declared the launching a success.

Over the next two days, Chinese flight controllers plan to guide Shenzhou-8 through a carefully choreographed rendezvous sequence to catch up with its target, the Tiangong-1 spacecraft, dubbed "Heavenly Palace," that was launched Sept. 29.

If all goes well, Shenzhou-8 will automatically dock with Tiangong-1 for 12 days of joint operations.

"As the first Chinese spacecraft to be used in a rendezvous mission, Shenzhou-8 will pave the way for future missions carrying a human crew," Chang Bonan, chief engineer with the China Aerospace Science and Technology Corporation, said in a story published by CCTV news. "It's main role is to test its reliability as a means of transport between the earth and other spacecraft."

The solar-powered Tiangong-1 is a prototype space station core module that measures 34 feet long, 11 feet wide and tips the scales at 8.5 tons. It features a pressurized experiment module where visiting crews can live and work and a "resource module" housing electrical power, propulsion and life support systems.

For comparison, the International Space Station operated by the United States, Russia, Europe, Canada, and Japan, is the size of a football field, weighs more than 450 tons and has a pressurized volume comparable to a 747 jumbo jet. It has been staffed with rotating crews of up to six astronauts and cosmonauts for more than 11 years.

The Shenzhou-8 mission "will make it possible for China to carry out space exploration of larger scale," Zhou Jianping, chief designer of China's manned space program, told Xinhua Sunday. "The mastering of rendezvous and docking technologies will lay a key technical foundation for China's building of space station and deep-space exploration."

The Tiangong project is expected to continue for about two years. China plans to launch at least two more Shenzhou spacecraft to the module, possibly launching astronauts, or "taikonauts," aboard Shenzhou-9 next year to test manual docking procedures.