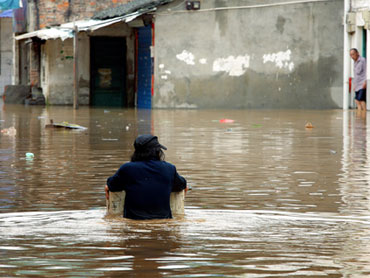 Floods caused by heavy storms have killed 46 people this week in southern China, with 50 people missing as heavy rains had yet to subside.

The Ministry of Civil Affairs said Friday emergency rescuers had been dispatched across southern China to help the 2.6 million people affected by the flooding, which has caused $400 million in damages.

So far this year, about 200 people have died from flooding and heavy rains, a statement on the State Flood Control and Disaster Relief Headquarters website said.

More than 200,000 people have been evacuated from homes in Guangdong, Sichuan, Fujian, Jiangxi, Hunan and Guangxi provinces, according to the Ministry of Civil Affairs website late Thursday. It said 46 people had died.

China's rainy season, which began in May, follows the worst drought in a century for southern Yunnan, Guizhou and Guangxi regions. The drought affected 61 million people, leaving millions without drinking water and 12 million acres (about 5 million hectares) barren since last year.

China's huge land mass means severe storms can cause floods in one region while other parts of the country can experience drought.

Strong rainstorms have led to the collapse of reservoirs, overflowing rivers, landslides, power outages, and damage to highways, the disaster relief agency website said, calling for heightened inspections of reservoirs in the flood regions.