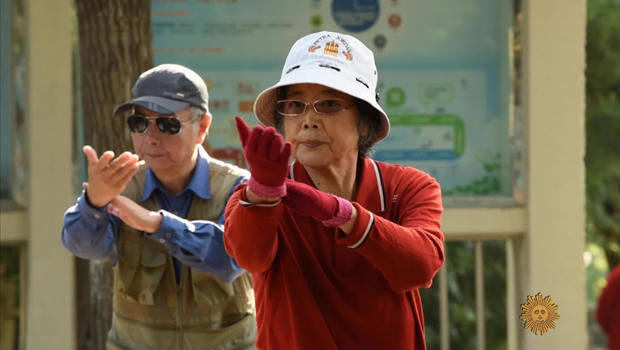 Something nearly unthinkable has happened in China: a return to normal – from morning tai-chi at Beijing's Temple of the Sun, to the lunch crush in the central business district, and the rush home at sunset across the Avenue of Eternal Peace.

It's hard to believe cities across China, with millions of people, looked like ghost towns earlier this year. In January CBS News was the first U.S. network in Wuhan, where the pandemic started. The government struck back hard and fast – forcing up to 50 million people into lockdown for two months; building new hospitals in less than two weeks; welding some families inside their homes; testing and contact tracing, descending on new outbreaks with speed; adopting a QR health code system on smartphones; banning nearly all foreigners from entering the country; and putting everyone who was allowed to return (including correspondent Ramy Inocencio) into a 14-day quarantine at a government-designated hotel, all thanks to a mix of authoritarian rule and the memory of SARS in 2003.

As COVID peaked in February, Shanghai and the city's historic Bund stood eerily quiet. But not anymore.

The masses have returned and the most of the masks have not.

The sheer normalcy of this is strange, said Inocencio, almost as if COVID never happened at all.

In a country of 1.4 billion, fewer than 5,000 were officially reported to have died, compared to more than 210,000 (and counting) in the United States.

Critics of China says its death toll is too low to be true, a fair claim for a country where bad news is often covered up.

Last week President Trump eagerly reminded America where COVID began: "It was China's fault, and China's going to pay a big price for what they've done to this country," he said.

Roark Jones, from Georgia, is a sophomore at New York University's campus in Shanghai. With a mandatory mask, flash of a health code and temperature check, he attends his classes. While most international students fled, Jones decided to stay.

"In February, I was basically in my dorm the entire time," Jones said. "And then by April, things were pretty open. Now, people sometimes don't even wear masks outside. The pandemic's basically nonexistent here."

Now, "mixed mode" classes, from statistics to modern dance, are another new normal: some students physically in the room, some virtually. No one raises a fuss.

Jones said, "Everyone in China is very willing to abide by any policy set forth for containment of the disease.  One thing that was kind of inspiring to me is that everyone did the quarantine."

And the result: business is back and bustling, like at China's first Shake Shack, where Joyce Du is a proud general manager.

Inocencio asked, "When did this Shake Shack close for coronavirus?"

"Never. We're working every day, and all times."

"What do you think is the most important prevention measure that you want to share with American restaurants?"

As life goes on, the show does, too, in Hangzhou, 100 miles west, home of Cirque du Soleil's only show in operation, out of 44 in the world. Half of the artists are Chinese. The other half international, from the U.S., Canada, Russia, Australia and France.

Acrobats have been dancing, spinning and flying to masked audiences since June.

Inocencio asked Yvonne Yuen, the show's technical director, "Has there ever been a coronavirus incident?"

"Not, with audience, not with our staff," Yuen replied. "So, we've been very fortunate. I would say China really is one of the safest places right now to be in, in terms of the world, in terms of the COVID situation."

NYU's Roark Jones might agree: "If I went back to the United States right now, to be frank, I'd be a little nervous."

And he would have a tough time coming back. China is keeping its borders shut to most foreigners to keep coronavirus out, too. In a country steeped in more than 3,000 years of history, China's leaders intend for it to be around for at least 3,000 more.