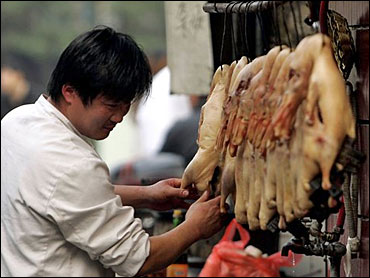 China on Wednesday reported its second confirmed human death from bird flu, while tests showed a teacher who fell ill elsewhere in the country does not have the H5N1 bird flu virus.

China's Health Ministry said Wednesday that the latest fatality — a 35-year-old farmer identified only by her surname, Xu — died Tuesday after developing a fever and pneumonia-like symptoms following contact with sick and dead poultry.

The woman tested positive for the H5N1 virus, the official Xinhua News Agency said, citing the Chinese Center for Disease Control and Prevention.

The woman lived in Xiuning County in the eastern province of Anhui, Xinhua said. It gave no further details. China's first confirmed bird flu death was also a woman from Anhui.

The country's only other confirmed bird flu case was a 9-year-old boy in the central province of Hunan, who fell ill but recovered. His 12-year-old sister was recorded as a suspected case, and later died. However, her body was cremated before tests could confirm whether she had the virus.