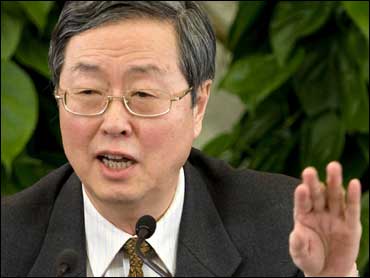 China is calling for a new global currency to replace the dominant dollar, showing a growing assertiveness on revamping the world economy ahead of next week's London summit on the financial crisis.

The surprise proposal by Beijing's central bank governor reflects unease about its vast holdings of U.S. government bonds and adds to Chinese pressure to overhaul a global financial system dominated by the dollar and Western governments. Both the United States and the European Union brushed off the idea.

The world economic crisis shows the "inherent vulnerabilities and systemic risks in the existing international monetary system," Gov. Zhou Xiaochuan said in an essay released Monday by the bank. He recommended creating a currency made up of a basket of global currencies and controlled by the International Monetary Fund and said it would help "to achieve the objective of safeguarding global economic and financial stability."

Zhou did not mention the dollar by name. But in an unusual step, the essay was published in both Chinese and English, making clear it was meant for a foreign audience.

China has long been uneasy about relying on the dollar for the bulk of its trade and to store foreign reserves. Premier Wen Jiabao publicly appealed to Washington this month to avoid any response to the crisis that might weaken the dollar and the value of Beijing's estimated $1 trillion in Treasuries and other U.S. government debt.

Wen said he was "a little bit worried" about China's holdings of U.S. government debt, but the country's central bank affirmed on Monday that it would continue buying up American debt.

For decades, the dollar has been the world's most widely used currency. Many governments hold a large portion of their reserves in dollars. Crude oil and many commodities are priced in dollars. Business deals around the world are done in dollars.

But the financial crisis has highlighted how America's economic problems - and by extension the dollar - can wreak havoc on nations around the world. China is in a bind. To keep the value of its currency steady - some say undervalued - the Chinese government has to recycle its huge trade surpluses, and the biggest, most liquid option for investing them is U.S. government debt.

To better insulate countries from the ills of one country or one currency, Zhou said the IMF should create a "reserve currency" based on shares in the body held by its 185 member nations, known as special drawing rights, or SDRs.

He said it also should be used for trade, pricing commodities and accounting, not just government finance.

"I don't believe that there's a need for a global currency," Mr. Obama said.

The president also pointed to the current strength of American money. "The reason the dollar is strong right now is because investors consider the United States the strongest economy in the world with the most stable political system in the world."

Earlier in the day, both U.S. Treasury Secretary Timothy Geithner and Federal Reserve Chairman Ben Bernanke took similar positions at a congressional hearing. They were asked by Rep. Michele Bachmann, R-Minn., if they would "categorically renounce the United States moving away from the dollar and going to a global currency," and both said they would.

And the European Union's top economy official said the dollar's role as the international reserve currency is secure despite China's proposal.

"Everybody agrees also that the present world reserve currency, the dollar, is there and will continue to be there for a long period of time," EU Commissioner Joaquin Almunia said Tuesday after a meeting of the European Commission.

Zhou also called for changing how SDRs are valued. Currently, they are based on the value of four currencies - the dollar, euro, yen and British pound. "The basket of currencies forming the basis for SDR valuation should be expanded to include currencies of all major economies," he wrote.

Beijing has been unusually bold in recent months in expressing concern about Washington's financial management and pushing for global economic changes. That reflects both its relative financial health and growing concern that increased globalization means missteps abroad could harm its own economy.

Zhou's comments are also part of China's longstanding push to reform the IMF, World Bank and global financial system to give greater voice to China and other developing economies - another theme that will be heard from China, Brazil, Russia and India at the summit of Group of 20 major economies next week.

"Overdue reforms should give proper representation to and increase the say of the emerging and developing economies," Yi Xianrong, a researcher with the Institute of Economics and Finances at the Chinese Academy of Social Sciences, a government think-tank, wrote in the government newspaper China Daily.

"Proper representation and a bigger voice for the developing countries are the need of the hour. For instance, being the world's third-largest economy and the largest foreign reserves holder, China should get its due place in the monetary body."

Another idea Yi raised was that the U.S. and Europe should give up their traditional privileges of appointing the heads of the World Bank and the IMF.

The idea of a creating a new global reserve currency isn't new. But analysts say the proposal isn't likely to gain much traction because it faces major obstacles. It would require acceptance from nations that have long used the dollar and hold huge stockpiles of the U.S. currency.

"There has been for decades talk about creating an international reserve currency and it has never really progressed," said Michael Pettis, a finance professor at Peking University's Guanghua School of Management.

Managing such a currency would require balancing the contradictory needs of countries with high and low growth or with trade surpluses or deficits, Pettis said. He said the 16 European nations that use the euro have faced "huge difficulties" in managing monetary policy even though their economies are similar.

"It's hard for me to imagine how it's going to be easier for the world to have a common currency for trade," he said.