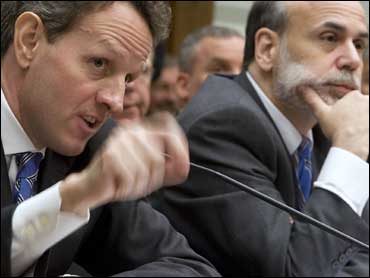 "AIG highlights broad failures of our financial system," Geithner told the House Financial Services Committee. "We must ensure that our country never faces this situation again."

At the same time, Federal Reserve Chairman Ben Bernanke revealed that he had considered filing suit to keep AIG from paying millions in executive bonuses but that his legal advisers counseled him against it.

Geithner acknowledged that the current climate of anger, including the furor over those retention bonuses, will complicate any effort by the Obama administration to get more bailout money from Congress. "We recognize it will be extraordinarily difficult," he said.

The administration sought to use that rancor to build support for its financial overhaul proposals.

Geithner joined Bernanke in calling for greater governmental authority over complicated and troubled financial companies - power they likened to the authority wielded over banks by the Federal Deposit Insurance Corporation. That includes the power to seize control of institutions, take over their bad loans and other illiquid assets and sell good ones to competitors.

AIG is a globally interconnected colossus, with 74 million customers worldwide and operations in more than 130 countries. The government decided it was simply too big to let fail.

"Its failure could have resulted in a 1930s-style global financial and economic meltdown, with catastrophic implications for production, income and jobs," Bernanke told the panel.

Geithner, Bernanke and New York Fed President William C. Dudley testified in a rare joint appearance before the panel. Their testimony came a day after the Fed unveiled a new bank rescue plan under which the government would take responsibility for up to $1 trillion in sour mortgage securities with the help of private investors.

That delighted Wall Street and the Dow industrials shot up nearly 500 points. On Tuesday, Wall Street gave back some of its gains and the Dow was down just over 45 points in midday trading.

Much of Tuesday's discussion centered on ways to help the government better deal with future AIG-like companies whose failure could devastate the financial system and the drag down the economy.

"As we have seen with AIG, distress at large, interconnected, non-depository financial institutions can pose systemic risks just as distress at banks can," Geithner said. "The administration proposes legislation to give the U.S. government the same basic set of tools for addressing financial distress at non-banks as it has in the bank context"

Geithner made it clear he believes the treasury secretary should be granted unprecedented power, after consultation with Federal Reserve Board officials, to take control of a major financial institution and run it. The treasury chief is an official of the administration, unlike the FDIC, which is an independent regulatory agency.

The witnesses were asked if AIG would have been treated any differently, including the payment of $165 million in bonuses earlier this month, if such powers had existed last September, when the Fed began the government bailout of the insurer.

"Quite differently. It could have been taken into receivership or conservatorship. ...The bonus issue would not have arisen," Bernanke said.

He said that contracts providing for the bonuses could have been adjusted and "we could have taken haircuts" against some of AIG's financial obligations to other companies.

AIG has become a symbol of reckless risk-taking on Wall Street. The bonuses came even as AIG reported a stunning $62 billion loss, the biggest in U.S. corporate history.

The government has bailed out AIG four times, to the tune of more than $180 billion altogether.

New York Attorney General Andrew Cuomo said Monday that 15 employees who received some of the largest bonuses from AIG have agreed to return them in full, totaling about $50 million.

Citing a "new era of corporate and individual responsibility," Cuomo said that the individuals who have agreed to return the bonuses have done the "right thing."

"It's what our country needs and demands," Cuomo said.

The House last week voted overwhelmingly to slap 90 percent taxes on the largest bonuses. Similar but more limited legislation is before the Senate.

Still, White House support for using the tax code in such a fashion has been tepid at best. And Democrats seem to be moving off the concept.

"If the money is returned, the legislation may no longer be necessary," said House Majority Leader Steny Hoyer, D-Md.

As to Geithner seeking more authority, Hoyer said he wanted to discuss with committee Chairman Barney Frank, D-Mass., "whether or not such delegation is appropriate or whether there should be greater oversight."

Geithner has been sharply criticized for his role in the AIG bailout because he helped put the deal together last September as then-president of the New York Fed, yet said he did not learn of the big bonuses until two weeks ago.

In a sharp exchange, Geithner was asked by Rep. Brad Sherman, D-Calif., whether there were other financial companies besides AIG who took taxpayer bailouts and then paid big bonuses to their executives.

"You're right, this goes well beyond AIG," said Geithner.

Sherman demanded a chart of every executive at TARP-funded companies who makes more than $1 million a year, reports CBS News correspondent Nancy Cordes.

Geither was noncommittal. Sherman told him he was trying to "hide the ball."

"I'm not going to hide the ball," Geithner said. "I'll reflect on the suggestion you made."

Bernanke said it was "highly inappropriate to pay substantial bonuses" to the employees. Bernanke said he asked that the payments be stopped but was told that they were mandated by contracts agreed to before the government seized control of AIG on September 16.

"I then asked that suit be filed to prevent the payments," he said. Bernanke said that his legal staff counseled against this action on the grounds that Connecticut law provided for substantial punitive damages in the event any such suit failed. AIG's financial products division has a base in Connecticut.

But the Connecticut attorney general disagreed and said "if the Fed had called we would have given the green light" to sue, reports Cordes.

Connecticut lawmakers also subpoenaed AIG executives who received bonuses. The Stamford Advocate reports that the AIG workers, some of whom have received death threats, are concerned about security at the State Capitol, as well as the ground rules for questioning.

The AIG bonuses created a public relations headache for President Barack Obama at a time when he was trying to gin up public and political support for his economic policies, bank-rescue plan and overhaul of the nation's regulatory structure.

Government bailouts of AIG, Citigroup Inc., Bank of America Corp. and others have put billions of taxpayers' dollars at risk over the past year and have angered the American public.