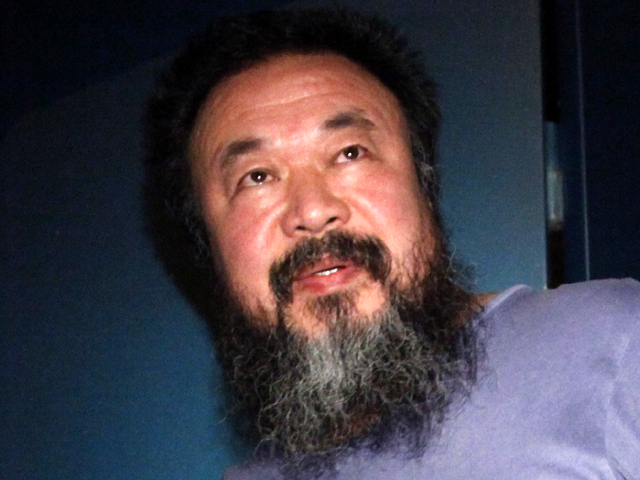 BEIJING - Renowned artist Ai Weiwei, the most high-profile target of a sweeping crackdown on activists in China, returned home late Wednesday after nearly three months in detention. Looking tired and thinner, he said the conditions of his release meant he could not talk more.

The official Xinhua News Agency said Ai confessed to tax evasion, accusations his family had long denied and which activists had denounced as a false premise for detaining him. He has spoken out strongly against the ruling Communist Party, and his family and supporters say he was being punished for speaking out about the communist leadership and social problems.

Ai, who had been taken away on April 3, walked through the gate of his suburban home studio shortly after 11 p.m. with his mother and wife. He said his health was fine and thanked reporters for their support outside his studio, but said he could not speak further.

"I'm sorry I can't (talk), I am on probation, please understand," Ai said, speaking in English.

The conditions appeared to extend also to Ai's family, although his mother told reporters she was relieved to see him again. "I'm so happy that my son is back," Gao Ying said.

The outspoken artist's detention had sparked an international outcry, with the United States and other countries saying it was a sign of China's deteriorating human rights situation.

That international condemnation, along with Ai's party connections as the son of one of China's most famous modern poets, had convinced authorities to strike a deal with Ai on his release, said Jerome Cohen, a top expert on Chinese law at New York University.

"As often happens with sensitive cases, it was too hot to handle and they had to find a way out," Cohen said by phone from New York City.

He said Ai was most likely released on a form of bail that restricts suspects' movements to their home city for one year. However, authorities can reopen the case at any time, meaning Ai faces the ever-present threat of being detained again on the same accusations.

Despite that, Cohen said Ai's release under those terms was probably the best outcome that could be expected, given the degree to which he had angered those in power.

"It's quite a step back for the regime. It demonstrates the utility of large amounts of international attention, plus international connections that had been sufficient to keep him out of jail before," he said.

Ai's release might also have been a face-saving move, coming just days before Chinese Premier Wen Jiabao was due to travel to Hungary, Britain and Germany, countries where supporters of the artist have been vocal in their condemnation of his detention.

"That would be a big relief for the artist and his family, even though the reported circumstances of his release on bail continue to appear depressing," Westerwelle said in a written statement.

State Department deputy spokesman Mark Toner told a news conference Wednesday the U.S. has yet to confirm the media reports of Ai's release but that Washington would welcome it.

"It's always a good thing when an individual who is only in prison for exercising his internationally recognized human rights is released," Toner said.

Several of Ai's work colleagues have also been detained, but there was no immediate word on their fate.

Hundreds of Chinese lawyers, activists, and other intellectuals have disappeared or been questioned or detained by authorities in the ongoing clampdown, and those released have almost universally kept silent, possibly fearing repercussions.

The three-paragraph Xinhua report said Ai had shown a "good attitude in confessing his crimes" and pledging to pay taxes he owed. It also said Ai's poor health was a factor in his release. The 54-year-old artist has high blood pressure and diabetes.

Formal charges against Ai have never been announced, and the state media report did not mention any pending charges or trial. It is extremely rare for detained people to be released on bail in China.

Ai's wife Lu Qing said the company in question is registered and belongs to her, not him. The company handles the business aspects of Ai's art career.

Sophie Richardson, Asia advocacy director for Human Rights Watch, said Ai will likely face onerous restrictions on his activities beyond merely a travel ban, based on the experience of others recently released.

The "highly dubious grounds" on which Ai was detained and the apparent lack of due process in his release called into question China's often-repeated claim to be a country ruled by law, Richardson said.

Well-known British sculptor Anish Kapoor, who dedicated one of his latest monumental works to the imprisoned artist, said he was delighted with the news but wanted Ai to have a fair chance to answer the accusations against him.

While I am thankful that he has been released, I do not think that artists should present their work in China until the situation has been resolved," Kapoor said in a statement.

Ai is among China's most internationally known artists and had a hand in designing Beijing's iconic Bird's Nest Olympic stadium before souring on the event. His fame has soared in recent years, both for his groundbreaking art and his bold irreverence toward authority.

The detention of Ai at Beijing's airport on April 3 made him the most famous victim of a sweeping crackdown against dissent in China that began in February when online calls for protests similar to those in the Middle East and North Africa began to circulate.

He had been keeping an informal tally of the detentions on Twitter.

Ai was held under a form of detention known as residential surveillance somewhere outside Beijing. His wife was permitted one brief, monitored meeting in which she said he seemed well cared for and was not being held in a formal jail.

He told Lu during the visit that he was taking long walks everyday, had his blood pressure checked seven times a day, and was eating and sleeping well.

Ai has also spoken critically about a number of national scandals, including the deaths of students in shoddily built schools that collapsed during the 2008 Sichuan earthquake, children killed or sickened by tainted infant formula and a deadly high-rise fire in Shanghai that killed 58 and was blamed on negligent workers and corrupt inspectors.