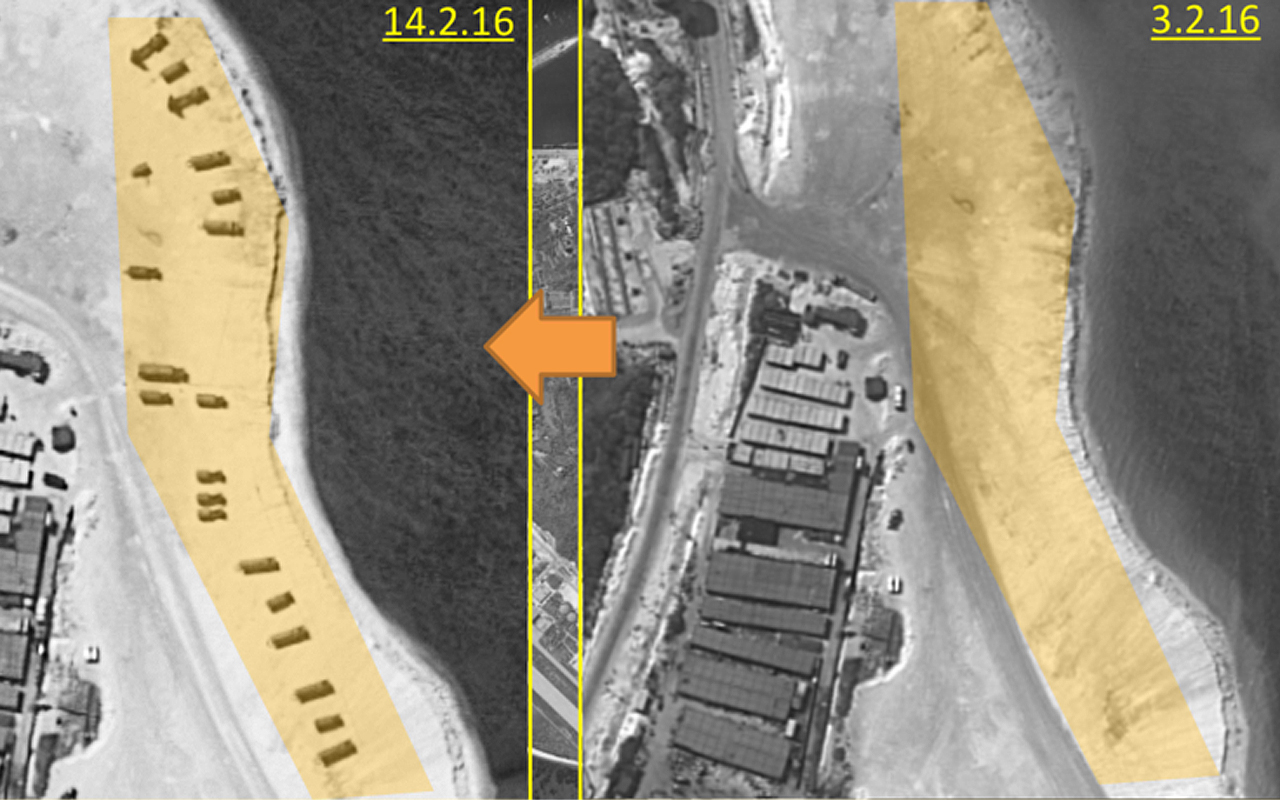 BEIJING -- Foreign Minister Wang Yi on Wednesday sought to downplay China's positioning of anti-aircraft missiles on a disputed South China Sea island, accusing the media of hyping the issue and saying more attention should be paid to what he called "public goods and services" provided by China's development of its maritime claims.

Taiwan's Ministry of National Defense said in a statement it had "grasped that Communist China had deployed" an unspecified number of missiles on Woody Island in the Paracel group. The Philippines said the development increased regional tensions.

Satellite imagery company ImageSat International published images from early February and others taken about two weeks later, showing a stretch of beach that was empty in the earlier image, but dotted with apparent missiles launching systems in the Feb. 14 photo.

State Department spokesman Mark Toner said commercial satellite imagery appeared to indicate China has deployed a surface-to-air missile system. Another U.S. official gave a more direct confirmation of the deployment on Woody Island. The official, who was not authorized to discuss the information publicly and spoke on condition of anonymity, said it is unclear whether the deployment is intended for the long-term.

Wang, however, dismissed the concerns as an attempt by "certain Western media to create news stories."

U.S. officials confirmed to CBS News that the missiles had been deployed to Woody Island, but said it was not the first time such weapons had been located on the disputed islands and that it was possible the move would be temporary -- possibly a trial to gauge international reaction.

The move follows China's building of new islands in the disputed sea by piling sand atop reefs and then adding airstrips and military installations. They are seen as part of Beijing's efforts to claim virtually the entire South China Sea and its resources, which has prompted some of its wary neighbors to draw closer to the U.S.

Carter sought to reassure other Asian nations worried about China's land reclamation and territorial claims, noting that the U.S. has "treaties with a number of countries over there, and we have affirmed our commitments" to defend them in the face of any aggression.

The most dramatic work has taken place in the Spratly Island group, where the militaries of four nations have a presence, although similar work has also gone on at Woody and other Chinese holdings in the Paracels.

"The military will pay close attention to subsequent developments," the Taiwanese ministry statement said. Relevant parties should "work together to maintain peace and stability in the South China Sea region to refrain from any unilateral measure that would increase tensions," the statement added.

U.S. network Fox News also said China had moved surface-to-air missiles to the Paracels, identifying them as two batteries of the HQ-9 system, along with radar targeting arrays. The missiles have a range of about 125 miles, making them a threat to all forms of civilian and military aircraft.

Following talks with his Australian counterpart Julie Bishop, Wang said he had become aware of the missile reports just minutes before.

"We believe this is an attempt by certain Western media to create news stories," Wang said.

Echoing claims that the development was largely civilian oriented and benefited the region, Wang pointed to the construction of light houses, weather stations, and rescue and shelter facilities for fishermen.

"All of those are actions that China, as the biggest littoral state in the South China Sea, has undertaken to provide more public goods and services to the international community and play its positive role there," Wang said.

Wang said China's construction of military infrastructure was "consistent with the right to self-preservation and self-protection that China is entitled to under international law, so there should be no question about that."

Bishop reiterated that, like the U.S., Australia does not take sides on the issue of sovereignty, but urges all sides to maintain peace and stability. Australia welcomes statements by Chinese President Xi Jinping that "China does not intend to militarize these islands," she said.

Speaking to reporters in Tokyo, Adm. Harry Harris Jr., the commander of the U.S. Pacific Command, said he was unable to confirm the missile reports, but added the issue "concerns me greatly."

"When President Xi was here in Washington, he stood in the Rose Garden with President Obama and said China will not militarize the South China Sea. But there is every evidence every day that there has been an increase in militarization," Kerry said before meeting with Poland's foreign minister in Washington.

"It's a serious concern," he said, adding that he expected the U.S. would have a "very serious conversation" with China on the issue in the next few days.

Called Yongxingdao by China, Woody island is also claimed by Taiwan and Vietnam. Along with an artificial harbor, it boasts an airport, roads, army posts and other buildings and recent satellite imagery appears to show it is adding a helicopter base likely dedicated to anti-submarine warfare missions.

Taiwan and China claim almost the whole 1.35 million-square-mile South China Sea, including the Paracel chain. Vietnam and the Philippines claim much of the ocean, as well. Brunei and Malaysia have smaller claims.

Home to some of the world's busiest sea lanes, the ocean is also rich in fisheries and may hold oil and natural gas reserves under the seabed.

China's move is likely to rattle Vietnam the most because of its proximity to the Paracels and because of a history of maritime tensions with China that spiked in 2014 with a standoff after China moved a massive oil rig into disputed waters.

China regards Australia and the U.S. as unwelcome outside interlopers in regional waters. Wang and Bishop engaged in a testy exchange in December 2013 after Australia criticized China's unilateral declaration of an air defense zone in the East China Sea.

Ahead of Bishop's visit, President Barack Obama and the leaders of the 10-member Association of Southeast Asian Nations called Tuesday for the peaceful resolution of the region's maritime disputes.

Obama told a news conference that disputes must be resolved by legal means, including a case brought by the Philippines challenging China's sweeping claims over most of the South China Sea.

China has refused to take part in the proceedings, but Obama said parties to the U.N. law of the seas are obligated to respect the ruling, expected later this year.

Analysts say China's military moves in the South China Sea are primarily aimed at intimidating the Philippines and Vietnam, while solidifying its hold on the islands and boosting its ability to project force.

That is meanwhile strengthening those in the U.S., especially in the Pentagon, who "will want to more vigorously challenge China," said Thomas Berger, an expert on the region at Boston University.

China locks down another city as Omicron spreads ahead of Olympics

China denies it's working to rapidly expand its nuclear arsenal

How green can Beijing's "green Olympics" really be?
More