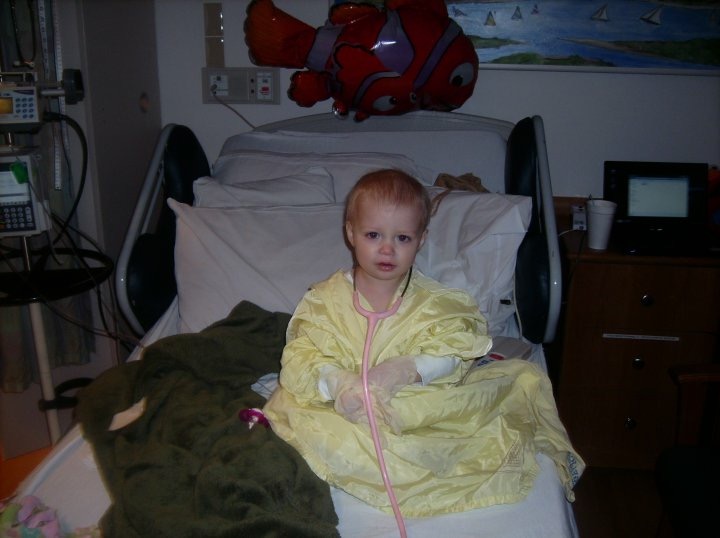 Shauna McLaughlin's daughter Madison Bergstrom, 7, was first diagnosed with acute lymphoblastic leukemia in March 2010. After two years of treatment, Madison was declared cancer-free, only to relapse a year later in 2013. Her last phase of treatment is currently scheduled for the end of March 2016. That would be six years -- almost to the day -- since Madison first sought treatment.

For McLaughlin, a single mom, it's been a difficult balancing act: making sure her daughter has the best possible care while struggling to stay afloat financially.

"Over the last five years or so, I've learned one thing, and that is to try to make it as normal as possible for you and your child in a very abnormal time," McLaughlin told CBS News. "The second time around, after her cancer came back, I had done it all already before, so I knew what to expect. I learned you just have to struggle to maintain as much normalcy for yourself and your child, and not let cancer take over your life."

During those years, McLaughlin had to give up full-time employment and work odd jobs in order to make ends meet. She went from always paying her bills on time to being forced to move out of her home. And experts say her story is all too common.

It's the kind of story that Madison's pediatric oncologist, Dr. Kira Bona, has been examining over the past two years. Bona was the lead author of a recent study out of the Dana-Farber/Boston Children's Cancer and Blood Disorders Center that zeroed in on the economic impact that pediatric cancer treatment has on families.

Given this all-encompassing impact on these families' lives, Bona said it's surprising this has "not been a hot topic of research before."

"It's a slippery slope for families -- about 20 percent to 30 percent of the group experienced food, housing, or energy insecurity at different times. Some started out with food insecurity, and then those who didn't start out with it, started to develop it as a major concern," Bona said.

Bona said that key to helping these families is providing services, from social workers to financial counseling, as part of the overall treatment.

McLaughlin, who was not part of Bona's study group, said that one indispensable lifeline for her came in the form of Family Reach, a non-profit organization which provides families with grants to pay for things like rent payments and transportation bills.

"It was just an amazing organization that made life easier for me," she said. "You don't always realize how hard it (tackling the expense of treatment) is. Dana-Farber/Boston Children's had a Q&A last year with people from all around the world -- everyone from social workers to doctors and some patients. It was sad. There was some patients who couldn't take the daily medications they needed, they would take them every other day, or even less, because of the high co-pays. Some people are just in such dire financial straits that they don't know what to do."

The study found that about one-quarter of families of children being treated for cancer lost more than 40 percent of their total household income, while one-third experienced housing, energy or food insecurity. Bona's results, were published in the journal Pediatrics Blood & Cancer, surveyed the families of 99 Dana-Farber/Boston Children's patients within the first month of cancer diagnosis and then again six months down the line in their treatment.

"My overall research stems from this understanding of how poverty impacts treatment outcomes," Bona told CBS News. "It's part of this research overall in the United States in pediatrics of how poverty can result in inferior health outcomes. It's actually not that well investigated within pediatric oncology."

McLaughlin moved in with her boyfriend in Canton, Massachusetts, this past July, but before that, she said she had to move out of her old home because she could no longer afford it. McLaughlin recounted how much she had to re-prioritize her life in order to make life as easy as possible for Madison, even taking on odd jobs like shoveling snow that she wouldn't have considered in the past.

"It's not what I normally would do, you know, it was like this 'Barbie girl' shoveling this snow off a roof," she joked.

"Other places perhaps might not be resourced enough, or have as many social workers as we do, or as many resource specialists as we have," Bona said. "It might be possible that there could be higher levels of need at less well-resourced places, but that is just a hypothesis."

Bona said she views this study as the first phase in a more comprehensive look into the struggles that many of these families face.

"The purpose of this study was really to understand whether material hardship was a problem. The study allows us to decide whether investigating this more made sense," she said. "The next step would be to conduct a prospective study of material hardship in children with newly diagnosed leukemia, for instance, and follow them over the course of their treatments in clinical trial. You could understand how hardships correlate with disease outcomes or overall survival."

"I hope there is much more to come, to see how we can better improve outcomes," she added.

McLaughlin said it was hard to explain to Madison exactly how difficult the treatment process would be at first. Now that she's a little older, McLaughlin says her daughter understands that she has cancer, but still doesn't fully grasp the strain cancer treatment places on her family. She does ask questions about "why she is different."

"She'll ask, 'why is my hair the way it is? Why can't I do all the other things that other kids do?' It's hard for her," McLaughlin said.

McLaughlin stressed that it's important for other parents in her position to not be afraid to seek help.

"The financial aspect of cancer treatment is not really talked about as much as it should be," McLaughlin said. "It's debilitating not just for the people with children with cancer, but for people who have cancer themselves, for families. It affects everyone."