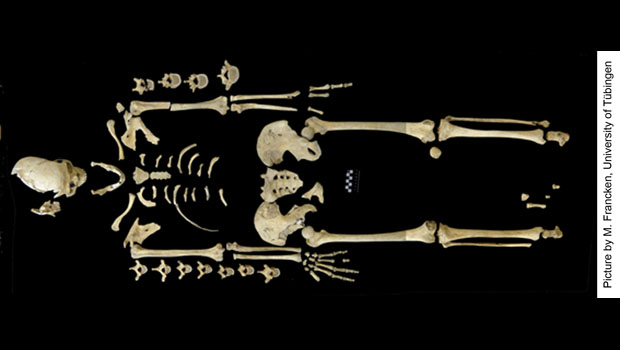 Living in Europe's Neolithic Age more than 7,000 years ago was tough. Infectious diseases were rampant, agricultural work was exhausting and medical care was primitive.

And there's new evidence that our ancient ancestors suffered some of the same diseases still prevalent today. A recent examination of a female skeleton from that time period may very well be the oldest known case of leukemia, scientists say.

The discovery was made by a group of German scientists from the University of Tubingen's Senckenberg Center for Human Evolution and Paleoenvironment.

Lead researcher and paleoanthropologist Heike Scherf said she and her team used high-resolution CT scans to analyze the woman's skeleton, referred to as G61. They estimate the woman died between the ages of 30 and 40. Her remains were discovered alongside skeletons of 11 other people at a site in southern Germany during excavations took place in the 1980s and early 1990s.

In a press release, Scherf said she and her team found "an unusual loosening of the interior bone tissue" that suggests the effects of leukemia, commonly known as blood cancer. This "loosening," she explained, occurred in specific areas of the skeleton that contain blood-forming stem cells. In these locations, leukemia can occur.

"None of the other specimens showed this significant pattern," Scherf said, "even though they come from the same site and belong to the same age group."

The researchers said they ruled out other diseases that cause similar symptoms, such as osteoporosis and thyroid disorders. Still, even though the evidence strongly suggests the woman had leukemia, Scherf explained that one mystery remains. "We cannot determine whether the woman actually died from the disease," she said.