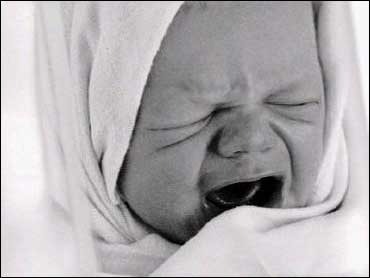 You've probably seen babies born with strawberries or red marks on their faces, but you may not know the clinical term for them. They're called hemangiomas -- benign blood vessel tumors that affect as many as 10 percent of all babies.

If you've never heard of that word, you're not alone. The Saturday Early Show's co-anchor Gretchen Carlson says she hadn't either, until last year when her own daughter was born with a hemangioma tumor in her eye.

This weekend, she shared her story to increase awareness about hemangiomas, how common and dangerous they can be and how pediatricians aren't always schooled in recognizing them. Carlson also met one courageous little girl, Anna, who also has the tumor.

Anna Dunchus is a four year old who is ready to take on the world. But life for the energetic little girl has not been picture perfect.

Within days after her birth, Joanne Dunchus noticed her cherub-faced infant was developing red spots on her face.

"She was born with one red dot right below her lip line, But they told me it was broken capillaries and that it would go away," says Dunchus, Anna's mother.

Instead, the dots multiplied into hemangiomas. The cause of hemangiomas is not known, but they're more prevalent in Caucasians, premature infants and girls over boys, in a ratio of 3 1/2 to one. Dr. Francine Blei has dedicated her medical career to treating and studying the condition.

"The child will be born, and over the first few weeks, the lesion will grow," explains Blei. "Usually during the first 3 months of life, the lesion has the most rapid rate of growth. They can range from very small, rather innocuous lesions in not-cosmetically-significant locations, to quite devastating cosmetic issues. Especially if they're very evident on the face."

Hemangiomas are not normally life-threatening, unless they are located close to vital organs. By six weeks, a hemangioma began to attack Anna's airway as well as her face.

"One night, we went to bed and she was in the bassinet in the bedroom," recalls Anna Dunchus, "I was reading my book and I started to hear [stifled breathing sounds] ... And I went over to the bassinet and she had moved her body to the corner and her mouth was back and open like [she was] gasping for air."

Anna had to be given a tracheotomy to allow her to breathe. But like almost all affected babies, she won her battle with hemangiomas in the long run. Unlike malignant cancer, hemangioma tumors eventually get better on their own.

"The hemangioma cells are regulated," says Blei. "They're programmed to grow. But they're also programmed to shut off from growing. And that's the difference. Tumor cells, they just keep growing and growing. Hemangiomas grow during the first year of life, and then they get better."

"They stopped growing at about a year," says Joanne Dunchus. "By the fall, that following fall, which is about 18 months, [there was a] significant difference."

Sometimes a dangerous hemangioma can occur beneath the skin with less obvious warning signs.

At just 2 months old, Gretchen Carlson's daughter Kaia was diagnosed with a hemangioma in her left eye socket, which threatened her vision.

"If you cut off light being delivered to the back of the eye, the brain cells for vision will not develop normally," explains Blei. "That's why we consider this a medical emergency."

Since surgery was not an option, doctors gave Kaia oral steroids for 7 months -- hoping the medicine would shrink the tumor. A patch on the unaffected eye made sure Kaia's affected eye got enough exercise.

Now, almost a month off the steroids, Carlson and her husband received the best news they could hear about Kaia.

"She's looking as good as she's ever looked," says Ceisler.

The prognosis is also positive for Anna Dunchus.

"For me, the saving grace in the whole thing has been ... she's just so happy," says Joanne Dunchus, Anna's mother. "That carried me through it. She loves life and it didn't stop her."

Blei says many pediatricians don't know a lot about hemangiomas because the training in medical school is minimal. She also points out how important it is to get the correct diagnosis right away.

For more information, go to the following sites:

Recommended books for patients and physicians:

"Strength, Courage, and Confidence: What Facial Difference Teaches Us,"
by Jennifer Wallace

"The Okay Book," by Todd Parr

" Hemangiomas and Vascular Malformations of the Head and Neck,"
Edited by Dr. Milton Waner and Dr. James Suen

"The Birthmark," by Nathaniel Hawthorne

" Reincarnation and Biology: A Contribution to the Etiology of Birthmarksand Birth Defects, Vol. 1 & 2," by Dr. Ian Stevenson