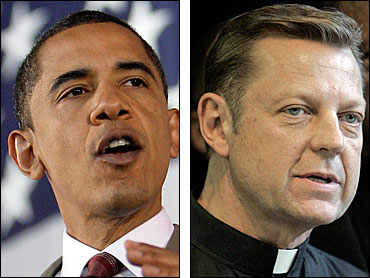 The Chicago priest whose comments mocking Hillary Rodham Clinton reignited the controversy over Barack Obama's former church stood before his own parishioners Sunday and apologized.

The Rev. Michael Pfleger said he isn't racist or sexist and called the past few days "the most painful" of his life.

"I apologize for anyone who was offended and who thought it to be mockery," he said at his church, St. Sabina's. "That was neither my intent nor was it my heart."

During that sermon, Pfleger, a Catholic priest, pretended he was Clinton crying over "a black man stealing my show."

Pfleger's statements, coupled with a series of inflammatory remarks by Trinity's longtime pastor, the Rev. Jeremiah Wright, prompted Obama and his wife, Michelle, to resign their 20-year membership in the church on Chicago's South Side.

Pfleger, a 59-year-old white priest at a largely black South Side parish, is known for impassioned antics and outspoken activism that includes protests and acts of civil disobedience.

Since last week's fiery sermon, Pfleger promised not to campaign or even mention any candidate by name. He held to that promise Sunday.