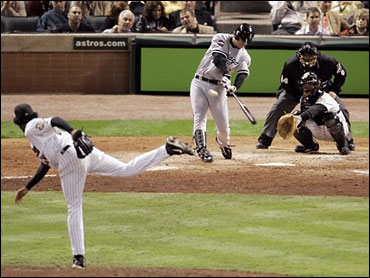 Another unlikely homer at the end, too.

And when it was finally over, after 5 hours and 41 minutes, the Chicago White Sox had won the longest game in World Series history and were on the cusp of quite a celebration.

Geoff Blum broke through with a tiebreaking homer in the 14th inning and Chicago beat the Houston Astros 7-5 on Wednesday morning to move within a win of a sweep and its first title since 1917.

Indeed it has — just look who's hitting the big home runs. Chicago won Game 2 on a ninth-inning shot by Scott Podsednik, who didn't have a homer the entire regular season.

Then it was Blum, a backup infielder and former Astro who waited on the bench all night before entering as part of a double switch in the 13th inning.

"It's the stuff dreams are made of," he said.

Not the White Sox, who waited 46 years to get back to the World Series. Not the Astros, who've never been here before.

Long after Chicago overcame a 4-0 deficit with five runs in the fifth against Roy Oswalt and Jason Lane hit a tying double for Houston in the eighth off Dustin Hermanson, Blum batted for the first time in a World Series with two outs in the 14th and faced Ezequiel Astacio, Houston's seventh pitcher.

With nearly all the fans remaining from the original crowd of 42,848 in Minute Maid Park, Blum sent a 2-0 pitch down the right-field line, and the ball sailed over the wall.

"You sit around for 14 innings and something like that happens," he said. "Somebody was watching out for me."

The White Sox acquired Blum from San Diego on July 31, right before the trade deadline. A starter with Houston in 2002-03, he's been mostly a backup since. He's had quite a year, though — his wife, Kory, gave birth to triplets on May 3.

"In the course of a season, anything can happen. I got traded here and it's obviously been a true blessing and an interesting year," Blum said. "I always had faith in myself."

While Blum was circling the bases in joy, Houston manager Phil Garner slammed a stool in the dugout.

"Unfortunately, that pitch got away from me," Astacio said.

Astacio allowed Chicago to load the bases on two infield singles and a walk, then forced in a run by walking Chris Widger on a 3-2 pitch.

Houston put runners at the corners in the bottom half against winner Damaso Marte. Mark Buehrle, who pitched seven innings in Game 2 on Sunday night, came in as Chicago's ninth pitcher and the 17th of the game, both Series records.

Adam Everett then popped to shortstop for the final out at 1:20 a.m. local time. The previous longest Series game was 4:51, when the Yankees beat the Mets in 12 innings in Game 1 in 2000. This matched the longest by innings, a Babe Ruth complete game for the Boston Red Sox against Brooklyn in 1914.

Freddy Garcia will try to complete the sweep for Chicago on Wednesday night, opposed by Brandon Backe. No team has overcome a 3-0 World Series deficit, and only one major league team has done it in any round of the postseason — the Boston Red Sox in last year's AL championship series against the New York Yankees.

Houston, which got only one hit after the fourth inning, stranded 15 runners. The Astros left the potential winning run at third base in the ninth and at second base in the 10th and 11th.

"It's some pretty poor hitting, absolute rotten hitting," Garner said. "We might have played 40 innings and it didn't look (like) we were going to get a runner across."

In the first World Series game played in Texas, a sellout crowd filled Minute Maid Park with plenty of noise — but less than the Astros had hoped for. Against the wishes of the home team, Major League Baseball ordered the retractable roof open for the game because the skies were cloudless and the temperature a comfortable 61 degrees at game time. Houston wanted the roof closed, to increase the decibels.

Oswalt, 3-0 in the postseason coming in, couldn't hold the 4-0 lead, allowing five runs in a 46-pitch fifth inning that was capped by Pierzynski's two-run double.

After giving up three runs in the first four innings, Jon Garland pitched shutout ball for the next four. But for the second straight game, Chicago's bullpen faltered.

Instead of bringing in Bobby Jenks, Chicago manager Ozzie Guillen summoned Hermanson for his first appearance of the postseason. Lane, who homered earlier, lined a tying double down the left-field line, leaving runners at second and third. Hermanson then struck out Ausmus.

Houston had another chance to win in the ninth, but Orlando Hernandez pitched out of a bases-loaded jam to send the game into extra innings.