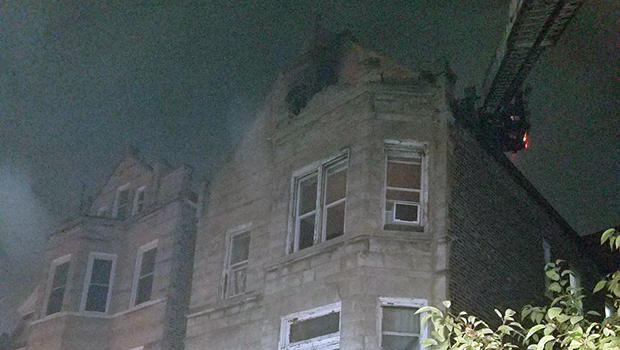 Eight people, including six children, were killed when a fire broke out inside a three-story apartment building in Chicago early Sunday, fire officials said. Two other people, including one firefighter, were also hospitalized.

"We have not had this in many, many, many years, this amount of fatalities and injuries in one location," Chicago Fire Commissioner Jose Santiago said, adding that one of the children who died was an infant.

The cause of the fire, which occurred on the 2200 block of Sacramento Avenue in the city's Marshall Square neighborhood, is not yet known. Santiago said no smoke detectors were found at the scene. A photo from the scene showed bricks charred from smoke on the exterior of the building.

Neighbors told CBS Chicago they heard a loud bang before the fire broke out. One neighbor said she was watching TV when she looked out her window and saw flames. She said she told everyone in her home to get out.

The Cook County Medical Examiner's Office said the victims have not been identified, and autopsies have not yet been scheduled.

The firefighter who was transported to the hospital is in good condition, Santiago said, and the fire department is in touch with the mayor's office regarding the blaze.