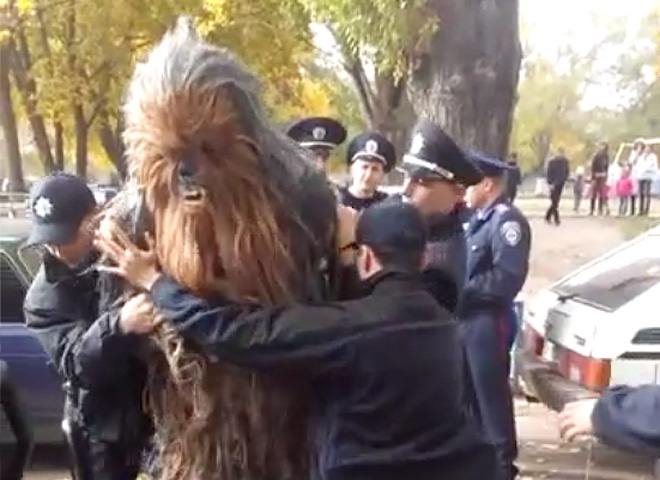 Members of the Internet Party of Ukraine, a fringe political group whose standard-bearers dress as "Star Wars" characters, were confronted by police at a polling pace in Odessa Sunday when they showed up to vote.

One man dressed as Chewbacca was arrested for not having a driver's license.

Videos posted online show the Wookie, with an Imperial Stormtrooper riding shotgun, stepping out of his fanciful car when officers asked for his ID.

Chewbacca was subdued by several police and arrested. According to the Hollywood Reporter, he was fined the equivalent of $7.50 for "malignant resistance to lawful requirements of a police officer."

Inside the polling station, "Darth Vader," who is the Internet Party's nominee for mayor of Odessa, was seen being denied the opportunity to vote, despite reportedly presenting a passport reading Darth Ivanovich Vader.

Last year, the Internet Party of Ukraine, which fielded Vader and Yoda as candidates, drew 0.36 percent of the vote.

In a political ad from 2014, Vader is seen playing his own John Williams theme on a traditional Ukrainian instrument: