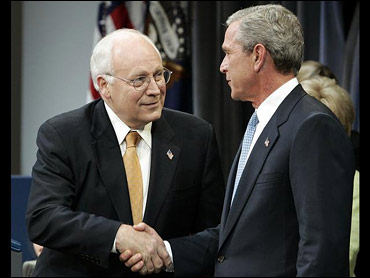 Vice President Dick Cheney easily surpassed his boss in earned income, taking in nearly $9 million in 2005. President Bush earned a comparably paltry $735,180 and paid $187,768 in federal taxes, according to the president's return released Friday by the White House.

The White House also released the 2005 tax return filed by Cheney and his wife, Lynne. According to the return, the Cheneys have overpaid their taxes this year and are entitled to a refund of about $1.9 million. Their adjusted gross income was about $8.82 million.

On their 2005 return the Bushes listed as income his presidential salary — about $400,000 — and investment income from trusts that hold their assets.

The couple contributed $75,560 to churches and charitable organizations, about $2,200 less than last year. Those included the American Red Cross and the Salvation Army's funds for hurricane relief in the United States and Pakistan; Martha's Table, which provides food and services to the underprivileged in the Washington area; the Archdiocese of New Orleans Catholic Charities; and the Mississippi Food Network.

The Bushes paid $26,172 in state property taxes on their ranch near Crawford, Texas, up about $4,000 from the year before.

The Cheneys reported adjusted gross income of nearly $8.82 million, which was largely the result of exercising stock options that had been set aside in 2001 for charity.

The Cheneys donated just under $6.87 million to charity from the stock options and royalties from Lynne Cheney's books. That left about $1.9 million in income, on which the Cheneys owed $529,636 in taxes.