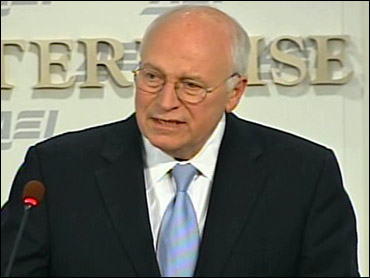 (CBS)
Moments after President Obama appealed for the need diverge sharply from Bush era policies with respect to national security, former Vice President Dick Cheney sought to defend the policies he and President George W. Bush enacted -- and to explain why they are still needed.

"When President Obama makes wise decisions, which I believe he has done in some respects... he deserves our support," Cheney said in a speech at the conservative thinktank the American Enterprise Institute. "When he faults or mischaracterizes the national security decisions we made in the Bush years, he deserves an answer."

Cheney said he remains a strong proponent of the interrogation programs employed by the CIA against detainees in the war on terror, calling them "legal, essential, justified, and successful, and the right thing to do."

To label enhanced interrogation techniques torture "is to libel the professionals who have saved American lives," Cheney said. He said to consider stopping such methods of interrogation is "unwise in the extreme" and "recklessness cloaked in righteousness."

He said waterboarding was only used on three detainees and that all methods used to interrogate detainees were given careful legal review before they were approved.

"Interrogators had authoritative guidance on the line between toughness and torture, and they knew to stay on the right side of it," he said.

The president in his speech earlier in the morning said the Bush administration made decisions "based upon fear rather than foresight and all too often trimmed facts and evidence to fit ideological predispositions."

Cheney, however, called protests from Washington politicians against tactics like waterboarding nothing more than "contrived indignation and phony moralizing."

He pointed out that Mr. Obama has reserved for himself the right to order enhanced interrogations after an emergency.

"He and his administration speak as if they have resolved some great moral dilemma," he said. "Instead, they have put the decision off while assigning a presumption of moral superiority to any decision we make in the future."

Cheney also defended the Bush administration's other means of attempting to pro-actively combat terrorists, such as secret surveillance programs and the wars in Iraq and Afghanistan.

He also said criticized the president's plan to shut down the prison at Guantanamo Bay with "little deliberation and no plan," saying that it would be difficult to close the prison in a way that serves the interests of justice and America's national security.

The president this morning insisted that the prison will be shut down, saying that its opening "set back the moral authority that is America's strongest currency in the world."

Mr. Obama also emphasized the need to balance national security with transparency. He pointed to his decision to release CIA interrogation memos, saying there was "no overriding reason to protect them."

Cheney, however, said the memos were redacted to leave out information about what the government learned from its interrogations while other documents with such information were not even considered for release.

"For reasons the administration has yet to explain, they believe the public has a right to know the method of the questions, but not the content of the answers," Cheney said.

As he continued his criticisms over the current administration's policies, Cheney said that debates in Washington over national security tactics would embolden terrorists.

"When they see the American government caught up in arguments about interrogations or whether foreign terrorists have constitutional rights, they don't stand back in awe of our legal system and wonder whether they had misjudged us all along," he said. "Instead, the terrorists see just what they were hoping for: our unity gone, our resolve shaken, our leaders distracted."

Along those lines, he criticized Washington politicians for their disputes with the CIA and for suggesting that those who recommended and approved enhanced interrogation techniques be prosecuted.

"It's hard to imagine a worse precedent filled with more possibilities for trouble and abuse than to have an incoming administration criminalize the policy decisions of its predecessor," he said. "For all the partisan anger that still lingers, our administration will stand up well in history, not despite our actions after 9-11, but because of them."