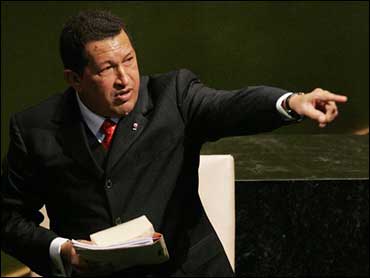 Venezuelan President Hugo Chavez took his verbal battle with the United States to the floor of the U.N. General Assembly on Wednesday, calling U.S. President George W. Bush "the devil" and denouncing what he said was U.S. imperialism.

The impassioned speech by Chavez, a leftist and one of Mr. Bush's staunchest critics, came a day after the U.S. president and Iranian President Mahmoud Ahmadinejad sparred over Tehran's disputed nuclear program but managed to avoid a personal encounter.

"The devil came here yesterday," Chavez said, referring to Mr. Bush's address on Tuesday and making the sign of the cross. "He came here talking as if he were the owner of the world."

The leftist leader, who has joined Iran and Cuba in opposing U.S. influence, accused Washington of "domination, exploitation and pillage of peoples of the world."

"We appeal to the people of the United States and the world to halt this threat, which is like a sword hanging over our head," he said.

Wednesday marked the first time a U.S. President has ever been attacked on the floor of the United Nations. Soviet Premier Nikita Khrushchev threatened the West in 1960, but he didn't personally attack President Eisenhower, reports CBS News national correspondent Byron Pitts.

"Venezuela's Hugo Chavez is rapidly becoming the new Fidel Castro, but with petro-dollars, at the U.N.," said CBS News Foreign Affairs Analyst Pamela Falk, "and as a candidate for a non-permanent seat on the Security Council in October, his anti-Bush comments are making him increasingly popular with member states in his campaign for that position."

Chavez's diatribe reflected the difficulty Mr. Bush faces in his key mission at the U.N. — convincing a largely skeptical world audience that his administration's fight against terrorism was not one targeting Muslims.

The main U.S. seat in the assembly hall was empty as Chavez spoke. But there was a "junior note taker" there, as is customary "when governments like that speak," the U.S. ambassador to the U.N said.

Ambassador John Bolton told The Associated Press that Chavez had the right to express his opinion, adding it was "too bad the people of Venezuela don't have free speech."

"I'm just not going to comment on this because his remarks just don't warrant a response," Bolton said. "Serious people can listen to what he had to say and if they do they will reject it."

One of the most significant things about Wednesday's event was not even a part of the Chavez's speech: Venezuela is the United States' third-largest source of imported oil, and Chavez has long threatened to cut off the United States, reports Pitts.

Chavez's threats prompted Sen. Richard Lugar, R-Ind., to call on the General Accounting Office to come up with a worst case scenario — and the answer wasn't good.

The GAO concluded that if Venezuela stopped its supplies, worldwide oil prices would immediately spike by $4 to $6 a barrel. Prices at the gas pumps would jump 11 cents to 15 cents per gallon, reports CBS News correspondent Trish Regan.

Chavez drew tentative giggles at times from the audience, but also some applause when he called Mr. Bush "the devil." Before leaving the podium, Chavez, again inciting the "devil" reference to Mr. Bush, said, "it smells of sulfur here, but God is with us!"

Chavez spoke on the second day of the annual ministerial meetings, which were overshadowed by an ambitious agenda of sideline talks.

The Mideast peace process also was in the spotlight, with ministers from the Quartet that drafted the stalled road map — the U.S., the U.N., the European Union and Russia — planning to meet. The Security Council also was scheduled to hold a ministerial meeting Thursday that Arab leaders hope will help revive the Mideast peace process.

On Wednesday, Mr. Bush met with Palestinian leader Mahmoud Abbas and described him as "a man of peace" who can help move forward the stalled peace process.

The meeting followed up on his speech a day earlier before the General Assembly in which Mr. Bush tried to advance his campaign for democracy in the Middle East during his address to the General Assembly. Mr. Bush said extremists were trying to justify their violence by falsely claiming the U.S. is waging war on Islam. He singled out Iran and Syria as sponsors of terrorism.

Mr. Bush also pointed to Tehran's rejection of a Security Council demand to stop enriching uranium by Aug. 31 or face the possibility of sanctions. But he addressed his remarks to the Iranian people in a clear insult to the government.

"The greatest obstacle to this future is that your rulers have chosen to deny you liberty and to use your nation's resources to fund terrorism and fuel extremism and pursue nuclear weapons," the U.S. leader said.

"Iran must abandon its nuclear weapons ambitions," he said. "Despite what the regime tells you, we have no objection to Iran's pursuit of a truly peaceful nuclear power program."

He said he hoped to see "the day when you can live in freedom, and America and Iran can be good friends and close partners in the cause of peace."

Ahmadinejad took the podium hours later, denouncing U.S. policies in Iraq and Lebanon and accusing Washington of abusing its power in the Security Council to punish others while protecting its own interests and allies.

The hard-line leader insisted that his nation's nuclear activities are "transparent, peaceful and under the watchful eye" of inspectors from the International Atomic Energy Agency, the U.N. nuclear watchdog. He also reiterated his nation's commitment to the Nuclear Nonproliferation Treaty.

Earlier this month, Ahmadinejad proposed a debate with Mr. Bush at the General Assembly's ministerial meeting after the White House dismissed a previous TV debate proposal as a "diversion" from serious concerns over Iran's nuclear program.