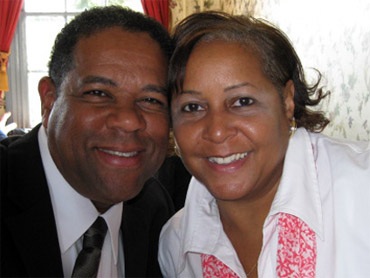 Henry (57) and Charlotte (55) Dorsey from Mays Landing, New Jersey. Henry is a Systems Engineer supporting The Federal Aviation Administration and Charlotte worked as a medical assistant. She retired from her job seven years ago.

Their Love Story: Charlotte and Henry have been together since Charlotte was 13 and Henry was 15. They met through Charlotte's sister when they were in school. They were together eight years before they got married. Henry realized she was the one when he told Charlotte if he didn't marry her he would never get married. They have spent the last 31 years raising their children. After two years of marriage they had a daughter. Twenty-one months later, they had another daughter. Thirteen years after the birth of their second daughter, they decided to adopt a baby boy (Micah), and nine years later they adopted a newborn (Jacob). Their two daughters are now 31 and 29, and their two adopted sons are now 16 and 7. Charlotte and Henry also have one grandson. They each dedicate their lives to taking care of their family. In their free time, whenever they find any, they like to sit on their porch with their music listening to the birds and noises surrounding their home or go for a short walk.

First Honeymoon: Charlotte and Henry spent their first honeymoon at the Poconos Resort in the Pocono Mountains in September 1976. They spent seven days at the honeymoon resort, Cove Haven, with a "heart-shaped" bed and tub. They said they did a lot of eating.

What A Second Honeymoon Would Mean To Them: They have a very busy and noisy household. They have raised children since they've been married, adopting a newborn when they were close to 50, and they are tired! They feel blessed to have such a close-knit family but it would be nice for them to get away, alone, for some down time with each other, without the noise, toys, and schoolwork.