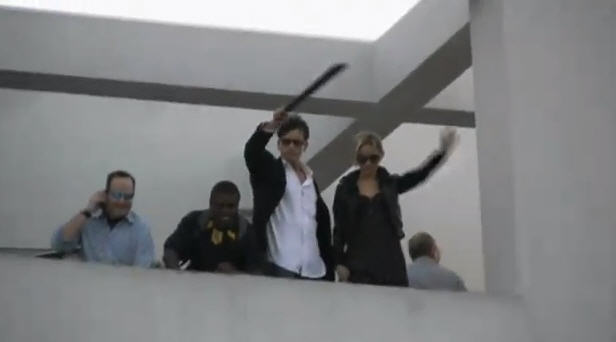 (CBS) Charlie Sheen is letting the world know how he feels about being fired from his hit sitcom, "Two and a Half Men."

The actor climbed to the top of the Live Nation office building in Beverly Hills, Calif.,  waved a machete and and drank from a bottle of "tiger blood" while a crowd cheered him on.

When asked how he felt about losing his job, Sheen paraphrased Martin Luther King Jr., saying, "Free at last, free at last!"

Back on the ground, Sheen told "Access Hollywood" that Warner Bros. never called him to say he was fired.

"I got a text or something," he said. "Here's another thing - these guys are such yellow cockroaches that they didn't even have the decency to call me. I put 5 bill[ion] in their cheap suit pockets and another half a bil' in what's-his-cheese's pockets and this is the... respect I get? It's just deplorable and they should be ashamed of themselves!"

He added that he blamed his firing not on his recent media onslaught, but his bosses not understanding him.

"Whatever. I guess if you can't process a guy, or realize his value, you must terminate him," Sheen told host Billy Bush. "That's real high-brow thinking, really evolved thinking. I don't know. It is what it is. I'm more worried about my children [Bob and Max] right now than any of this nonsense, you know."