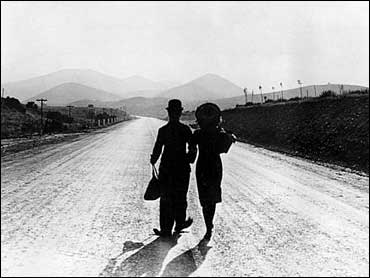 Early last century, a lovable tramp waddled across silent film screens the world over - amusing audiences entranced by the new form of entertainment.

It was called the motion picture, and Charlie Chaplin, the man behind the mustache, became an instant celebrity.

"He was the first global superstar," says Chaplin's biographer Jeffrey Vance. "Everybody wanted to meet him. I mean visitors at the studio were just tremendous. People like Churchill and Einstein and Gandhi and Bernard Shaw … all these people wanted to meet Charlie Chaplin. And this was just this little cockney lad from South London and he had this incredible fame, unprecedented fame."

Ninety years after the iconic Tramp first captured the hearts and funny bones of moviegoers, the story of the cockney lad from South London is being told anew.

Fans can look forward to Jeffrey Vance's "Chaplin: Genius of the Cinema" biography, a new documentary about Chaplin's life on screen and off and the DVD release of four digitally-restored Chaplin films, with four more soon to come.

"I just really believe he's one of those master spirits of the 20th century," says Vance. "I think what Shakespeare is to Elizabethan theater and Dickens to the Victorian novel and Picasso to modern art, Charlie Chaplin is to 20th century cinema."

It's an improbable rags to riches story. Born in poverty to a mother who went insane and a father who died an alcoholic, Chaplin would survive a workhouse for destitute children to become a teenage performer in London music halls. Landing in Hollywood at age 26. It was there, in 1914, the Tramp was born.

"He was always out of work or worrying about getting a job," says Time magazine film critic and Chaplin documentary producer Richard Schickel. "He was also mooning after the girl and not necessarily getting the girl."

"But there was always some optimism in that little figure heading off down the road."

The public got its first look at the Tramp in 1914's "Kid Auto Races at Venice." It was there that the Tramp was a nuisance to a camera crew.

"At first, he wasn't billed with the films," says biographer Vance. "His name wasn't mentioned. All a theatre manager had to do was create his own primitive silhouette with the writing underneath, 'He's here today,' and audiences would flock to the theater."

In 1921, he was the protective father figure to an orphan in "The Kid" - the first feature length film he wrote and directed.

"It's his first indication of really a soul in a film character," says Vance. "He mixed sentiment, slapstick and dramatic sequences in a comedy, and it had not been done before."

The 1925 classic "Gold Rush" is another Chaplin film being restored and re-released.

"[Gold Rush] has got all of his iconic sequences," says Vance. "Him on the verge of starvation - boiling and eating his shoe and eating it as if it were a Thanksgiving feast. The dance of the dinner rolls. And that wonderful sequence of thrill comedy of him with the teetering cabin."

"The Circus," which was originally released in 1928, may be one of Chaplin's lesser-known films, but it may be his funniest movie. It is especially hilarious considering what he overcame to make it.

"It was like the four horsemen of the Apocalypse came after him during the film," says Vance.

Sets were destroyed by fire. A divorce suit by his second wife shut down production for eight months. And, he received an IRS bill for $1 million in back taxes. But the show went on.

"How he made such a beautiful and wonderful comedy with all these terrible things happening to him behind the scenes is just tremendous," says Vance.

His behind the scenes life caused problems later. Chaplin's life was filled with scandal such as his fondness for teenage girls, his several marriages and leftist politics. But he had dominated the early days of Hollywood.

He built his own studio. In partnership with Mary Pickford, Douglas Fairbanks and DW Griffiths, Chaplin formed United Artists to distribute his pictures. He was the star, the writer, producer, director, editor and composer of his films. Chaplin even financed the films himself. He did whatever it took to get the films created just the way he wanted them.

"He would literally go 40, 50, 60, 70 times on the same shot," says Schickel. "I think that had to do with the kinetic nature of what he was doing. He could imagine the sequence in general terms, but he really had to get up on his feet and work it out in front of the camera and see what he was doing."

In 1931, the Tramp met a blind flower girl in one of Chaplin's greatest works, "City Lights."

"'City Lights' is his most lyrical and sublime film," says Vance. "The comedy, the romance, just the apex of the tramp character. And that ending, that celebrated ending, of city lights is probably the greatest close-up ever in film."

In 1936, "Modern Times" was a Chaplin statement on the industrial age. Sound films had doomed silent pictures years before, and it was time for the Tramp to bow out.

"He just felt that he was a silent artist and that he had perfected that language of pantomime," says Vance. "He thought he would lose something if he spoke and what sort of voice would the tramp have? Could the Tramp character even survive sound? He came to the realization that it couldn't, so he had to abandon the Tramp with sound film."

Near the end of "Modern Times," the Tramp speaks for the first and only time. But it's gibberish.

Chaplin made a handful of sound films - notably, "The Great Dictator," his slam of Hitler in 1940. The 1952 "Limelight" was about a fading comedy star set in London's music hall era.

"I was well aware that I was working with a genius," says Chaplin's co-star Claire Bloom, who was a 19-year-old awestruck British actress. "I knew that there was nobody like him. And there never has been and there never will be."

When Chaplin sailed for London for the premier of "Limelight," the United States revoked his re-entry permit, amid questions about his moral character and communist sympathies. Chaplin was outraged.

"[Chaplin was] very defiant, very disgusted with the American government,"
says Bloom. "He was determined to save what he could from the wreck."
Sydney Chaplin, a son from Charlie's second marriage, also appeared in "Limelight," and he recalled his father's exile.

"That was the time of the blacklisting in Hollywood," says Sydney Chaplin. "But, they never really got him. It was all insinuated that he was, you know a communist. And a very rich communist."

With his fourth wife, Eugene O'Neill's daughter Oona, and their children, Chaplin settled in Switzerland. He would make a few more films and make one last trip to America - nearly 20 years after going in to exile to accept an Academy Award. Chaplin was an acknowledged genius who never tired of the applause.

Sydney Chaplin likes to tell of an incident in the late '40s at what was then the lone silent film theatre in Hollywood. Sidney and a pal were in the front row "and they had a Chaplin, a bunch of Chaplin shorts. Oldies. Really old. So, we went there. But then, the whole evening was ruined by some moron in the back laughing so damn hard that, people were saying, 'Shut up back there.'

"The lights goes up and we start to leave and its my father sitting back there laughing at his own stuff. Oh, it was amazing. This guy is ruining the movie for everybody ... He's laughing at himself."

Even after he'd lost most of his audience to talking pictures, Charlie Chaplin still liked what he saw. And he still enjoyed his inspired creation - the Tramp who made it against all odds.

Fighting for the right to repair your own stuff