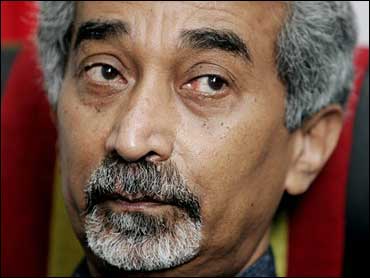 Nobel peace laureate Jose Ramos Horta was sworn in Saturday as East Timor's defense minister in a bid to end factional divisions that have plunged the country into chaos.

Ramos Horta won the 1996 Nobel peace prize for bringing world attention to the plight of East Timorese under years of often brutal Indonesian rule. He is already foreign minister.

Like President Xanana Gusmao, Ramos Horta is respected for his role in helping to win independence for East Timor. The men have worked closely together in recent years.

The defense and interior ministers resigned Thursday, taking responsibility for failing to prevent the worst violence since East Timor's break from Indonesia in 1999.

The wave of unrest was triggered when Prime Minister Mari Alkatiri fired 600 soldiers from the 1,400-member army in March. Before they were dismissed, the soldiers had gone on strike, claiming the government discriminated against them.

Sporadic clashes last month between the fired soldiers and government troops set off street warfare in Dili between gangs loosely allied with either side. The unrest escalated recently into riots and clashes with government forces.

Tens of thousands who have fled the chaos for camps in or near the capital have become increasingly desperate for food and other aid, and riots have occasionally broken out on food lines.

On Friday, residents frustrated after waiting for hours for food that never came looted a warehouse of computers, furniture and anything else they could carry away in trucks and on motorcycles - including musical instruments and a saddle.

"I'm hungry and the shops are closed. Where are we going to buy something to eat? The government rations are finished," said Cornelio Moniz Barreto. "Now we are thinking about our stomach, not politics."

Dozens of fighters attacked each other later Friday with clubs, machetes and slingshots near a bridge in the burned-out suburb of Comoro. Australian peacekeepers, including two Black Hawk helicopters, rushed to break up the clash.

Alkatiri, who has been blamed for many of the impoverished nation's problems, claimed his political rivals were fomenting the unrest as part of a plot to oust him.

"Their main objective is to overthrow the government," he told Indonesia's Metro television. He did not identify any culprits.

Alkatiri insists he is sharing power with Gusmao, who invoked emergency powers this week and declared he was taking charge of security.

The prime minister, who Ramos Horta has suggested should quit, said he will stay on until elections due next year.

Brig. Mick Slater, the commander of the Australian segment of a 2,000-strong foreign peacekeeping force that has been struggling to restore order, said some of the trouble may be orchestrated.

"There has been an element of opportunistic violence in there," Slater told reporters Friday. He said there are signs that "a number of these actions have been coordinated." He did not say who might be doing the coordination.

Slater also said the conditions were not yet right for peace talks.

East Timor voted for independence in a U.N.-sponsored referendum in 1999. The vote triggered mayhem by militias linked to the Indonesian military that left nearly 1,500 people dead. After an interim U.N. administration, East Timor declared itself independent in 2002.