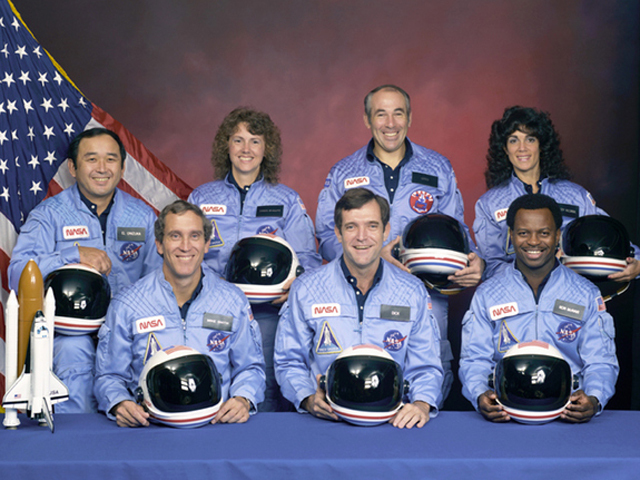 Almost anyone who was alive can remember where they were when the space shuttle Challenger exploded on Jan. 28, 1986. The ramp-up to that flight had been busy with news coverage of Challenger's "Teacher in Space" mission, the first time an "ordinary American" would be launched into space.

The publicity turned New Hampshire teacher Christa McAuliffe into a larger than life hero. Perhaps that's why, after the explosion, the media often referred to the lives lost as "Teacher Christa McAuliffe and six astronauts," something that was grossly unfair to her crewmates and their surviving families, who lost husbands, wives, friends, brothers and sisters that day.

Twenty-five years later, Dr. June Scobee Rodgers, widow of Challenger commander Dick Scobee, spoke with CBS News Radio from her home in Tennessee. Rodgers is the founding chair of the nonprofit Challenger Learning Centers and also the author of a new book,  "Silver Linings, My Life Before and After Challenger." She remembers the Challenger crew not as the space pioneers we know -- but as the human beings she knew.

In snapshots you probably won't find in their "official" biographies, here are some things she thought you'd enjoy knowing about her husband and friends:

Rodgers says she and future husband, Dick, met as teenagers at a church event and fell in love quickly. "Our eyes locked as we talked about the stars in the sky ....He wanted to fly airplanes...I wanted to be a teacher." Both achieved their dreams, and Rodgers says Scobee became the best guest speaker in her physics class, and also took her students flying. "We were deeply in love...he was truly my soul mate."

Christa McAuliffe beat out about 11,000 other applicants for the Teacher in Space program. "She had an endearing personality -- she was the perfect choice," says Rodgers, who adds that the fact that they were both teachers helped them become good friends quickly. McAuliffe was a frequent guest at the Scobee house; "We talked about our students, teaching, and simulation activities and why experiences outside textbooks were so important."

Mission Specialist Judith Resnik was also a frequent guest. Rodgers remembers her talking about the difficulties of growing up as girl who wanted to be an engineer -- only to be told by male teachers that a woman couldn't do it. Rodgers, who was struck by her "long curls" and femininity, says, "As we know, she became a Ph.D. and scientist and engineer!" They would often dine together at favorite restaurant; she loved seafood. And, she says, Resni\k was also a fine classical pianist who loved entertaining the families.

Mission specialist Ronald McNair was also a musician; he played jazz saxophone. Rodgers says her husband joked that if they had an astronaut band, he could play Popsicle sticks with his more talented crewmates. Rodgers says McNair was also an accomplished karate instructor, a Black Belt. She says, "Dick and I talked about wanting to get to know Ron better."

Mission Specialist Ellison Onizuka was a native Hawaiian who relished going home to talk to youngsters. Rodgers says he would "encourage them to study and work hard to achieve their dreams just as he had done, having worked in the sugar cane fields to earn money for school." Onazuka was an Eagle Scout as a youngster, and later supported Boy Scout troops in the Houston area, and coached youth football.

Michael Smith was Challenger's pilot, and like his commander he dreamed of flying as a child. Rodgers remembers, "When he was in high school he loved to play football but he often missed receiving balls passed to him. They lived near an airport and he'd look to the sky as a plane flew over. The coach asked him 'Are you going to play football or look at airplanes?' and Mike said. 'I decided to do both!"

Gregory Jarvis was a Hughes Aircraft engineer overseeing the deployment of a new satellite. As fate would have it, he'd been bumped from an earlier mission. Rodgers remember Jarvis as "always inquisitive. He asked wonderful questions, always wanting to learn more. He took classes in strange things from foreign languages to backpacking."

As we look back on the Challenger accident and its crew, we must remember that it wasn't "teacher in space Christa McAuliffe and six astronauts," but rather, seven dedicated and accomplished individuals who were not just teammates but husbands, wives, brothers, sisters, sons and daughters, colleagues and friends. Most of all, June Scobee Rodgers says, she hopes you'll remember them for the way they lived, rather than how they died. One can hear the smile in Rodgers' voice as she talks about them. "They were delightful people!"