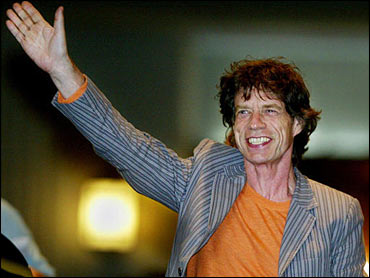 Sir Mick Jagger was delighted to become a knight. Keith Richards called it a disgrace. As with the Rolling Stones, so with British society: Some crave titles, some refuse them, some consider it all a joke.

Still others, like Winston Churchill, change their minds — perhaps when later offered a higher rank or from a government more to their taste.

The Sunday Times this week published a list of 300 well-known people — including singer David Bowie, comedian John Cleese and actors Albert Finney and Kenneth Branagh — who had declined honors since 1945.

About 2 percent of the 3,000 people chosen for honors each year decline, according to the government. Most do so quietly, but last month poet Benjamin Zephaniah announced that he had rejected an OBE -- Officer of the Order of the British Empire — because the title reminded him of "thousands of years of brutality."

"Stick it, Mr. Blair and Mrs. Queen, stop going on about empire," he added in an article for The Guardian newspaper.

This week, after the publication of the list, Prime Minister Tony Blair's government promised to make the system of awarding knighthoods and other honors more open.

Twice a year the government announces recipients of a host of titles, from knighthoods and damehoods to Companions of Honor, for exceptional achievement or service to the nation.

Though Queen Elizabeth II bestows the honors, she chooses only a few. Most recipients are chosen by committees of civil servants from nominations made by the government and the public.

The government wants to increase diversity on the selection committees — currently largely white, male and over 60 — and among recipients. Government statistics show that between 2 and 4 percent of the top honors go to people from ethic minorities, who make up about 8 percent of the population.

But some lawmakers are calling for a bigger overhaul.

"I think they are decided on a whim, I think they are capricious," said Labor Party lawmaker Gordon Prentice. "I just think it is time to get rid of all these ridiculous gradations. We need an open, simple, transparent system. The whole system really needs shaking up."

The Cabinet Office said Monday that all decisions about honors were made "entirely on merit."

However, one leaked document revealed that tennis star Tim Henman was being recommended for an OBE — Officer of the Order of the British Empire — to "add interest" to the list.

When the New Year's Honors are announced next week, Henman now is in the no-win situation of being revealed as considered but rejected, or given an honor for dubious reasons.

A prominent scientist, Colin Blakemore, threatened to resign as head of the Medical Research Council following reports that he was excluded from a knighthood because he is a vocal proponent of research on animals.

While rockers including Jagger, Elton John and Paul McCartney have been happy to accept knighthoods, many celebrities have quietly refused.

Rolling Stones guitarist Richards — who apparently has not been offered an award — criticized Jagger for accepting the "paltry honor."

Bowie turned down a CBE — Commander of the British Empire — and was quoted as saying he would never accept a knighthood. "I seriously don't know what it's for," he said.

Writer J.G. Ballard, whose novels include "Crash" and "Empire of the Sun," said he had turned down a CBE for services to literature.

"I am opposed to the honors system. The Sunday Times quoted he the whole thing is a preposterous charade," as saying.

Grumbling over titles is nothing new.

In the 13th century, when knights were expected to do military service, so many men declined the honor that King Henry III began imposing fines on those who refused, according to Debrett's Peerage & Baronetage.

Churchill said he could not accept a knighthood of the Order of the Garter from King George VI after losing the 1945 election — "given the order of the boot by the people," as he put it.

In 1953, back in power, Churchill accepted a knighthood from the queen.