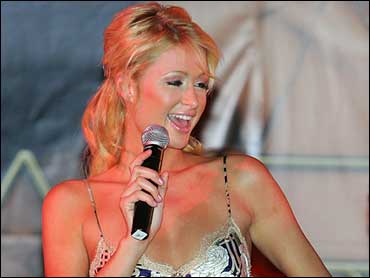 Three years ago, as Paris Hilton was about to turn 24, the celebutante got a sense of her worth to the nightclub industry in Las Vegas.

She had celebrated her previous three birthdays at Light, the Bellagio hotel-casino nightclub run by the Light Group. But for her 24th, another company swooped in with an offer that trumped the standard private jet to and from L.A., a free stay at a luxury suite, a sumptuous dinner and, of course, free booze.

The hotel heiress would get a big paycheck - Light was told $200,000 - just to party, but it had to be at PURE, a rival nightclub at Caesars Palace run by the PURE Management Group.

Her people let the Light Group know that their former deal was off.

"We said, `OK, well listen, we're not here to tell you not to make money,"' said a former Light executive, who did not want to be identified talking about industry specifics.

Celebrities often make appearances and walk the red carpet as part of the deal for coming to a nightclub. In return for generating media coverage, they receive all sorts of free goodies,if not cash. For nightclub operators, it has become the standard way of getting their establishments known.

Besides buzz, it generates more patrons, more people willing to pay a $30 cover charge, $15 for a cocktail and $500 for a bottle of name-brand vodka or champagne.

This weekend, PURE is looking to re-create its formula with the
opening of LAX and Noir nightclubs at the Luxor hotel-casino, with a grand-opening party Friday night hosted by Britney Spears. The company would not say how much it is paying her or whether Spears would perform.

A revamped club, Blush at the Wynn hotel-casino, also is hoping to cash in by opening Friday.

It's the start of a raucous couple of weeks that include Labor Day weekend and the MTV Video Music Awards - events that will attract plenty of partiers and paparazzi.

"That's a lot of sour grapes from other nightclubs, I guess,"
Davidovici said, while giving a tour of LAX, a plush club that resembles a chic 1920s opera house. "It's a third of those prices."

"If you look at (the celeb fee) from a monetary standpoint, it's significant, but not if you're taking in half a million dollars," he said.

PURE nightclub alone will generate about $53 million in revenue this year, while the company plans to gross more than $120 million from its 12 venues in Las Vegas and the Bahamas, he said.

On Tuesday, PURE nightclub hosted Paris Hilton and her sister, Nicky, as they unveiled new products from Nicky's clothing line. The club later gushed in a release that the sisters "danced their hearts out for the admiring onlookers" as "the two socialites stuck to the main VIP stage."

At LAX, the central focus of the theater-like layout is a raised dais of booths in front of the dance floor for "super VIPs and celebrities," Davidovici said.

"Britney will definitely be up there opening night," he said.

Industry observers say such celebrity-spotting is worth the price of admission.

"It's fun to be famous and rich. That's why people pay to get in and watch," said Lori Levine, the president of Flying Television, a talent-booking firm in New York.

"If you go to a club to see one of the `It' girls, you take a photo on your phone and you'll have a story to tell for the rest of the summer," she said.

The pay scale for celebrity ranges from free drinks to thousands of dollars.

NBA stars command appearance fees from $5,000 to $30,000 and models can broker $2,500 to $25,000 "depending on whether she's been in Victoria's Secret or Sports Illustrated's swimsuit issue," said Ryan Schinman, president of the entertainment consulting firm Platinum Rye Entertainment.

In exchange, the stars are obliged to do little more than shine.

"Be (listed) on the invite, pose for some pictures and call it a day," Schinman said.

For Blush's second weekend, it is hosting a "gifting suite" for rockers getting ready to take the stage for the Sept. 9 MTV Video Music Awards. A list of up to 300 invitees includes Fergie, Nelly Furtado, Timbaland, 50 Cent, and U2.

Those who show up the day of the awards can get pampering from a barber and/or masseuse and will walk away with a gift bag stuffed with clothing, spa packages and jewelry.

"It's for them to come in, relax, enjoy themselves," said Blush marketing director Rosine Frangie, adding "there's going to be a small press wall (red carpet) inside."

Other than the requisite photo op, there are few rules for contracted talent appearances.

At Spears' New Year's Eve appearance at PURE, the new mother famously fell asleep around 1 a.m. and was helped out of the club, generating a barrage of scandalous Internet gossip.

Some said it didn't matter a whit.

Light Group managing partner Andy Masi says his company doesn't pay for appearances but will supply jets, suites, dinners and drinks for celebrities on special nights such as club anniversaries - with tabs often running into the thousands of dollars. The group generally makes celebrities pay when they visit on their own.

Masi said red carpets are set up for press when celebrities want to promote their own projects or for anniversary bashes when the club wants to show off who came.

But unscripted celebrity appearances at Light's 10 restaurants and clubs in Las Vegas can do a better job of generating interest, he said.

"Afterward, the buzz gets out. Someone you know, Leonardo DiCaprio, seen eating in STACK or Tobey Maguire seen at FIX restaurant or Kevin Connolly hanging out at Jet (nightclub)," he said. "That stuff comes out afterward, but we're not crafting the entire night and spending money to create that. It's just happening naturally."

Both Light and PURE say building relationships with the stars and giving them great service is key to getting them to return. Both approaches appear to be working.

Light is set to make from $90 million to $120 million in revenue this year, and is set to open four new venues and manage a hotel-condo tower in the new CityCenter, Masi said.

"You couldn't get 5,000 people three nights a week for three years to come if you didn't run a real establishment, if our doormen were rude to people and the cocktail waitresses weren't friendly," he said.

"It's more about the regular customer than the celebrity, because that person is spending money."